‘TRY HARDER’ OUT FEB 12 VIA PARTISAN

East elaborates on the song’s meaning: “My friendship with Katharine was very important to me and changed my life. She is the reason I moved to New York. She was the first person I shared my songs with, and she insisted I share them with others. I wrote this song in a cab on my way to a staff holiday party at Hooters. I’m not sure why I was thinking about her in that moment but she is still an important figure in my life even though we haven’t seen each other in a while.”

On the video, East adds: “I’ve always thought cranes were beautiful, so when Luca mentioned his idea to shoot someone in a slow zoom on a crane I was hooked. I thought, if we can get a crane it will be so stunning to see someone dangling in the sky like that. Finding the crane was pretty daunting and at some points seemed pretty unlikely. But one day we went down to Red Hook, drawn by the many cranes permanently perched by the water and hoping to gain access. We were hitting a lot of discouraging dead ends when we stopped by our friend Benny’s record shop and he, magical person that he is, said he knew a guy, Preston, with a homemade 30 ft crane built by an artist to transport his large sculptures. Support your local record stores!”

‘Try Harder’ draws from East’s teenage years in West Texas, resulting in a beautiful ode to those of us who feel like our edges are rough, that perhaps we don’t always quite fit in. Through deceptively simple lyrics and a conspicuous absence of percussion, East dives into what she has known – adolescence, heartbreak, coming into a new social consciousness, and managing a perpetual feeling of unanchored-ness.

Hear the album’s title track, which is accompanied by a music video on NYC’s East River: https://youtu.be/W_CyNxts4pA

As the daughter of a military family, East spent her late childhood in Europe and teenage years in Abilene, Texas. After dropping out of community college, she moved to NYC where she’d meet a group of musicians whom she would come to befriend and collaborate with including Okay Kaya, Kelsey Lu, Wet + more. 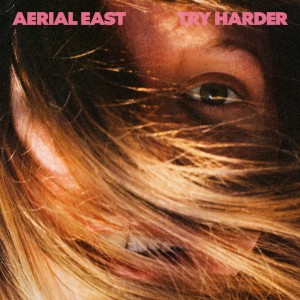 2. The Things We Build