OUT 4TH OCTOBER VIA CROCODILE LABORATORIES

Singer, songwriter and multi instrumentalist, AMY STUDT has announced that she will release her eagerly awaited new album ‘Happiest Girl In The Universe’ via the Crocodile Laboratories label on the 4th of October 2019.

‘Happiest Girl In The Universe’, recorded with Hatcham Social’s Toby Kidd, features eleven bold, intimate and heartfelt tracks including the acclaimed  singles  ‘Sleepwalker’ and ‘I Was Jesus In Your Veins’ together with the albums eponymous titled closer .  Haunting cinematic pop that recalls the drama of the late Scott Walker, the new long player is a narrative diary of depression, hope and redemption and is without doubt one of the most personal and innovative collection of songs that is likely to surface this year.

“This is the work of an artist genuinely using their chosen medium to explore and make sense of their life experience. There’s certainly nothing glamorising suffering here”.  Aural Aggravation 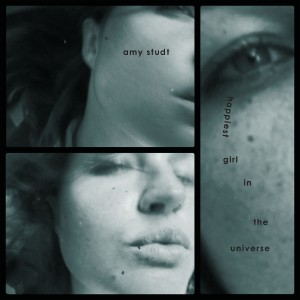 11. ‘Happiest Girl In The Universe’

With parents who are both accomplished classical musicians, Amy Studt’s future as a performer was always inevitable and from an really early age she was a proficient pop musician, playing piano, oboe and guitar.  A special talent, at a mere fourteen years of age she was signed to Simon Fuller’s roster of artists and then quickly picked up a deal with Polydor Records.

At sixteen she released her first single, ‘Just a Little Girl’ which charted at number 14 in the UK pop charts and reached number 1 on US radio play. Her second single ‘Misfit’ reached number 6 and this was soon followed by her debut album ‘False Smiles’ which went on to sell 260,000 copies.  Leaving Polydor in 2004 at the age of eighteen years, Amy stayed out of the public eye for a while, but in 2006 it was announced that she was working on a new album and she’d re-signed to Simon Fuller’s new 19 Entertainment Indie label.  A new album ‘My Paper Made Men’ was released in 2008 and after a couple of more singles and the album becoming a cult collectors item, Amy again withdrew from the limelight to a cottage in the countryside.

Shying away from the spotlight and constant touring, she built her own recording studio and spent time playing the odd low-key show and writing and recording the songs that have eventually formed the ‘Happiest Girl In The Universe’ record. Returning with a darker and more soulful sound, she is one of the most innovative artists around and is creating some of the most beautifully and inspirational music in the UK right now.

“Studt’s always had an exceptional voice and she blows us away with her control and heartfelt emotion with a pure raw vocal which sounds beyond beautiful”.   Celeb Mix

A truly engaging live performer, Amy Studt recently played a triumphant ‘Sold Out’ London show at Old St Pancras Church in July and will hit the road this Autumn for a string of live dates in support of ‘Happiest Girl In The Universe’ – full dates listed below.