Ahead of a fresh run of UK and Ireland shows this Autumn – ANNIE KEATING – is revealing a surprise new single: “Sunshine Parade”.

Released on 15th August, the track is a taster of a brand new EP from the NYC singer-songwriter, ‘Twenty 22 Tour EP’, which will be exclusively available at her upcoming shows. (See the full list of dates below where you can catch a show and pick up a copy).

With its blazing Keith Richards-inspired guitar licks and vaporising lyrics capable of blistering even the most hydrated of tongues, “Sunshine Parade” is the tarmac-melting new release from Annie Keating.

Born in the daze of the New York heatwave in the summer of ‘21, “Sunshine Parade” came together as Keating found herself dreaming of escaping the city’s almost claustrophobic temperatures. As Mercury relentlessly rose, she began to play around with some phrases that were hounding her thoughts in the heat.

“It was hot enough to fry an egg on the pavement” remembers Annie. “When I was walking my dog in the thick August heat, I wanted to take myself someplace else with my imagination, to have some fun with words”

Inspired by a phrase inherited from her mother to not “let it rain on your parade”, the single offers a tongue-in-cheek inversion of that old adage, as Keating purrs:  “There’s no rain on this parade / yeah not today babe not today / You can lie down in the shade but sunshine’s what I really crave / There’ll be no rain now on this Sunshine Parade”.

A song ultimately about remaining resolute in the face of adversity; with its sticky Stones-ian strut and a rolling alt-country groove, “Sunshine Parade” will resonate with anyone who has sought shelter from heatwaves or heartaches.

“Sunshine Parade” is the third new song to emerge from a tour exclusive Annie Keating EP entitled ‘Twenty 22 Tour EP’. Featuring a number of other unreleased tracks, the eight-track set will be available directly to fans ONLY at UK and Ireland shows (as listed below). The EP directly follows Keating’s 15 song tour-de-force pandemic album, ‘Bristol County Tides’ (her eighth full-length record which received rave reviews last year) and promises to feature some of her best work yet, from rockers and heartbreakers and beyond.

Tickets for all shows are on sale now. Catch Annie Keating and band at these dates and venues as follows:

A staple of the contemporary Americana scene, Annie Keating writes and sings like a woman who knows deep down that heartache is the price of hope, and she can make us believe — in that way that only the best artists can — that all of it is worth the cost.

Talent spotted by BBC Radio‘s Bob Harris, Keating released her debut album: ‘The High Dive’ in 2004. Ever since, she has been growing in stature and reputation with each of the 10 studio album and EP releases she put her name on; drawing formidable comparisons to artists including Lucinda Williams and John Prine along the way.

In 2021, Keating released her eighth studio album ‘Bristol County Tides’, a record that tells an evocative story of love, loss, and finding what matters most in uncertain times, the album takes the listener on a journey from Brooklyn to the coast, through fifteen beautiful, tender songs. Standing as her most accomplished, inspired, and ambitious to date, the record was praised by Folk Radio UK as “personal and universal… unequivocally Keating’s finest hour yet.” Stream it here.

Becoming a regular fixture at festivals across the USA and Europe, Keating has performed her music to major crowds at the likes of Take Root (Netherlands), Glasgow Americana Festival, Maverick (UK), Buscadero (Italy) NXNE and The Brooklyn Americana Fest.

Hitting the road again in the Autumn of 2022, a stretch of upcoming European shows will see Keating assembling some of the UK’s finest players to bring an added raucous energy and unbridled joy to her oeuvre.

Performing as The Annie Keating Band, the line-up will feature Scott Warman on double/electric bass (who recently appeared on Bob Harris’s charity release of Stand By Me alongside the likes of Mark Knopfler), rising star Joe Coombs on electric/acoustic/slide guitars (who has played internationally with a wide variety of artists such as Grammy nominated songwriter Yola on her Walk Through Fire Tour, Jaime Wyatt, Laura Evans, Robert Vincent, Sam Morrow and Lynne Hanson), plus Jamie Dawson on drums (a member of The Dreaming Spires and Steady Habits, and regular collaborator with Speedbuggy USA).

With new music on the horizon, standby for further news and updates from Annie Keating very soon… 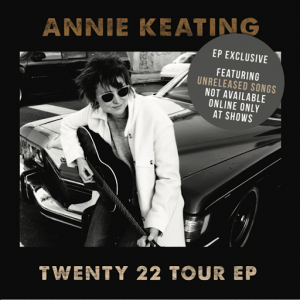 “Sunshine Parade is Annie Keating at her joyous, devilish best.  Essential listening”
AT THE BARRIER

“A truly intoxicating parade of sound. Funk infused rock and roll pack an undeniable punch… Joy that won’t be stolen or taken away fills the listener with an oddly hopeful jolt and swagger.”

“Don’t let the song title fool you. There’s a depth and darkness beneath Annie’s latest track “Sunshine Parade.” The band groove is heavy and thick, while Annie’s powerful vocal cuts through…”

“A cross between Willie Nelson and John Prine … you don’t get any better than that.” THE VILLAGE VOICE

“Keating is building the reputation her talent deserves.” THE TELEGRAPH

Her performances radiate warmth and honesty.” THE IRISH TIMES

​“Her talent and ability are profound.”  NO DEPRESSION

“Lucinda Williams without the angst, Keating will enchant anyone but a deaf shoe-gazer.”   ACOUSTIC MAGAZINE