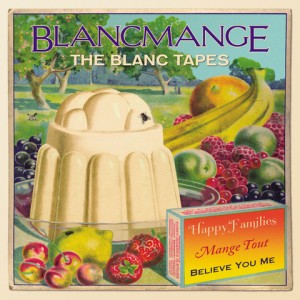 “Blancmange has been part of the soundtrack to my life ever since Happy Families was released. Cannot wait to exact revengeon my neighbours by cranking ‘Game Above My Head’ to 13 on the hi-fi between 3-4am. They just make me happy. Take THAT, Christopher Guest!” JOHN GRANT

‘Listening to Blancmange obsessively. Probably the most under-rated electronic act of all time.’ MOBY

Trailblazing synth pop outfit – BLANCMANGE – are pleased to announce: ‘The Blanc Tapes’; a collector’s boxset that will re-issue their first three albums on vinyl and in one deluxe package for the very first time.

Available on 24th May 2019, this lavish, limited edition and exclusively vinyl-only release will compile the band’s highly influential early 80s output, including their classic albums: Happy Families (1982), Mange Tout (1984) and Believe You Me (1985).

Complete with individual artwork slipcases encasing all three records within, each album will come pressed as a double 12” black vinyl in a gatefold sleeve with printed inner-sleeves. (See featured pic below).

Across four sides of vinyl dedicated to each album, fans will be able to indulge in 56 tracks of lovingly remastered versions of the original albums, plus a rich seam of B-sides, extended versions, remixes, previously unreleased tracks, and demos all associated with each era.

Digital copies of album will also be available through a complimentary download card included. 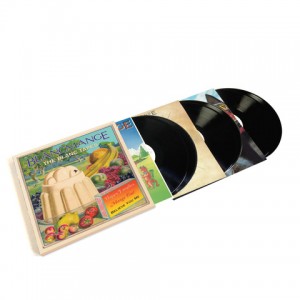 The full track-listing for each album featured in ‘The Blanc Tapes’ Vinyl Boxset is as follows:

From the very start you can hear how Blancmange crackle with inventiveness and intelligence – lyrics that fork out the surreal from the mundane and music brimming with pop suss and a whirling, experimental sense of adventure. Happy Families, released in 1982, feels like a fully-formed electronic pop classic. Highlights include ‘Living On The Ceiling’ (a striking Number 7 hit in ’82 thanks to its mix of electronics with tabla and sitar), the melancholia of ‘Waves’, ‘Feel Me’s call-and-response electro-funk, the intense ‘I Can’t Explain’ and ‘God’s Kitchen’ which is an early example of Neil Arthur’s gift with images and wordplay (surely he’s one of the pop music’s best lyric writers). However the depth and skill of the songwriting almost disguises the band’s primitive roots as DIY sound experimentalists. Arthur and Stephen Luscombe first got together in 1979, creating weird and slightly ‘battered’ home-made, ‘cassette tape’ music with vacuum cleaners and kitchen utensils. Their debut EP release Irene And Mavis in April 1980 is a wonderfully original oddity – homespun, claustrophobic, even beautiful in places. A year later the gorgeously fragile ‘Sad Day’ appeared on Stevo’s 1981 Some Bizzarre compilation album (documenting underground electronic bands of the era including The The and Soft Cell) and this proved to be their first significant breakthrough, alerting London Records who signed them to a record deal a few months later.

You can hear some early demos on side C of Happy Families in the new vinyl boxset, hinting at a strange, otherworldly ‘shadow’ Blancmange, not a million miles away from Joy Division, Devo and Cabaret Voltaire. It’s a fascinating glimpse into a whole spidergram of possible futures, some of which were later developed and explored by Arthur with Blancmange albums Nil By Mouth (2015) and Commuter 23 (2016).
Happy Families also features long-term guitarist David Rhodes (famous for his work with Peter Gabriel, Scott Walker and Kate Bush). Rhodes provides a vital link from the 1982 debut to the forthcoming Blancmange album, Unfurnished Rooms (due out in autumn 2017). ‘David Rhodes who we’d first met while supporting the band Japan on tour in 1981 joined us, to add better guitar than I could imagine or play,’ says Neil Arthur. ‘He nicked Japan’s beers and gave them to us and became a friend for life.’

Blancmange’s second album, Mange Tout reached Number 8 in the UK charts in 1984 and spawned more hits – notably ‘Blind Vision’ (no 10), ‘Don’t Tell Me’ (No 8) and their fantastic cover of ABBA’s ‘The Day Before You Came’ (much loved by ABBA who let them use footage from their original video for the Blancmange promo). It signals another change for the band’s music, now increasingly built around deep, propulsive dance grooves – no wonder John Grant likes to turn ‘Game Above My Head’ to 13 on his hi-fi. The band produced this track with John Owen Williams and it indicates exactly where they were heading musically, culturally and geographically – in fact to New York and Sigma Sound with disco producer John Luongo (credits included mixes for The Jacksons, Patti LaBelle and Sly Stone). As Arthur recalls:

‘Once we’d shaved our heads and hired yellow bikes to get around Manhattan, we felt perfectly at home… I slept out a couple of times in Central Park for inspiration. None came along. One day at the studio I was recording noises and clips from the TV when I noticed the lift indicator showing the said lift was on its way to our floor from street level. Out jumped this small woman with what looked like a pizza delivery bag over her shoulder asking for Jellybean (DJ/Producer). I pointed at a door to one of the other studios and off she went saying thank you. That was the only time I’ve met Madonna – and I thought she was delivering a pizza!’

In 1983 New York clubs such as Danceteria, Limelight, Paradise Garage and (an admittedly fading) Studio 54 became the backdrop to their studio sessions, which yielded the manic, David-Byrne-turned-to-11 thrill of ‘Murder’, the slow-mo, richly orchestrated ‘Time Became The Tide’ and anthemic ‘Blind Vision’. The electronic beats featured on album track ‘All Things Are Nice’ are further fleshed out on this re-issue with some of the best 12” extended versions of the era (notably 9 minute take on ‘Blind Vision’ on Side D and a wonderful ‘Game Above My Head’ (Long Version) on Side C). B-sides, sessions and unreleased material continue to reveal the band’s darker synthetic arts.

The third and final Blancmange album of the 1980s, Believe You Me was released in 1985, at a time when the public’s enthusiasm for synthesizer bands was showing signs of waning. Indeed it only reached Number 54 in the charts. However, there’s a bitter-sweet quality to pop songs such as ‘Lose Your Love’, ‘Don’t You Love It All’ and ‘What’s Your Problem’ which provides some understated pleasures. The lovely string-led ‘Lorraine’s My Nurse’ and instrumental closer ‘John’ are also quietly affecting, while ‘Paradise Is’ and ‘Believe’ are nuanced electronic songs, full of darkness and light; melody and atmosphere. The sense of enjoyable melancholia is fully crystallised in one of the band’s finest moments ‘Why Don’t They Leave Things Alone?’ – a lost classic from an under-rated finale.

The bonus material on Sides C + D witnesses further electronic experiments such as ‘Scream Down The House’ and excellent extended renditions of ‘What’s Your Problem?’and ‘I Can See It’, but also shows Arthur developing a new richness as a vocalist on the brilliant ‘River Of Life’.

Despite the promise of these fresh directions and a world waking up to new forms of dance music, which surely Blancmange could have played their part in, the band announced they were splitting up in June 1986.

Arthur: ‘We were asked to play at the Royal Albert Hall as part of a Greenpeace charity concert. To help promote the event we’d trundled off to Hyde Park to stand in front of a huge model whale with John Hurt, as you do. Later at the show, I remember looking around during the concert and thinking to myself, “what the bloody hell am I doing here?” What started as an experimental duo, had become a full on (no)show band. Also, it felt like Stephen and I were growing apart due to us working together for so long! Time to stop this for 26 years or so and protect our friendship.’

So what happened next? After working on their own projects and film music, they returned in 2011 to great acclaim with their fourth studio release, Blanc Burn – ‘new sounds and renewed enthusiasm’ (The Guardian).

Semi Detached (darker but still pop-savvy) followed in 2015, the first of several new records written and recorded by Neil Arthur and without the input of Stephen Luscombe due to illness. These include Blancmange’s first ever instrumental album, Nil By Mouth (ambient, new sense of freedom) and Commuter 23 (minimalist, brutalist, raw with moments of hazy Krautrock) which arrived in 2016.

The inspiration continued with Blancmange’s acclaimed latest album Unfurnished Rooms, which arrived only a few months after Neil Arthur’s collaboration with Benge on Fader’s ultra-analogue First Light. Song-based but with fresh twists in the arrangements (psychedelic, prog, post-punk), Unfurnished Rooms is full of haunted passion – edgy, pared down and personal.

As Mojo magazine recently commented on Blancmange’s most recent material: ‘Music Pop Art has seldom been as good.’

BLANCMANGE: ’THE BLANC TAPES’ – THE LIMITED EDITION VINYL BOXSET
RELEASED ON 24th MAY VIA LONDON RECORDS

WATCH A TRAILER FOR THE SET HERE // PRE-ORDER HERE