One of Africa’s most distinctive singer-songwriters, BLICK BASSY, will be performing his political, poignant and arrestingly beautiful new album, ‘1958’ at a series of rare UK appearances this Spring.

Taking in shows across England, Scotland and Wales, Blick’s 6-date tour will begin with a performance at Carsphairn’s Knockengorroch Festival on 23rd May 2020 and wrap-up with an unmissable set at London’s Songlines Encounters at Kings Place on 31st May.

The full dates are as follows:

29 – Fire In The Mountain Festival, Aberystwyth

Tickets are on sale now, available from: https://blickbassy.com

Blick’s New album, ’1958′, follows his acclaimed album ‘Akö’ of 2015.  ’1958′ is a defiant tribute to the heroes who fought and died for the independence of his native Cameroon.   It is a gorgeous selection of tender and soulful songs, sung in Bassa, his ancestral language.

Blick was born in Cameroon and now lives in France. His music first took shape with the award-winning band Macase with whom he released many albums, culminating in Akö and the song ‘Kiki’ from Akö was used to launch the iPhone 6 in 2015.

’1958′ is about Ruben Um Nyobé, the anti-colonialist leader of the Popular Union of Cameroon (UPC), who was shot dead by French troops on 13th September ’1958′, two years before the country became independent.  The UPC had been campaigning for fifteen years during which time many people died, something which has been subtly annihilated from history by the French and Cameroonian state until recently.

Um Nyobé, like Blick, was from the Bassa region and ethnic group, known, after many years of displacement and exploitation by European traders, to be anti-colonialist.  Blick wants to shed light on his story:

“…in school we studied the French version of what happened. The way I learned it in the books  was that they were agitators, troublemakers. Which is wrong. He was in this movement hidden in the mountains, organising the Cameroonian People’s Union, and the truth about what happened has never been out.”

The gentle pulse of traditional Bassa beats such as the assiko, bolobo or hondo run through the songs: ‘Mpodol’, which means ‘He who carries the voice of his people’ was the nickname of Um Nyobé;  ‘Maqui’, which speaks of the courage of the bush fighters in the face of French terror; ‘Ngwa’, in which Bassy briefs the ghost of Um Nyobé on the state of the country for which he fought; ‘Ngui Yi’ that bemoans the blithe ignorance of modern Cameroon youth, hypnotised by the baubles and empty promises of the West; or ‘Pochë’ which reminds modern Cameroonians of those who betrayed the country’s true interests.

Blick Bassy wants to delve back into his history and bring it into the open to try and help his fellow Africans, and all of us, to understand both the true nature of his homeland – what made it – and the need to make it prosper. It’s a call to act.  “The emancipation of Africa interests no-one else.  People fight for their own interests and they’re right to do so.  It’s up to us Africans to defend our interests on our own”.

But ’1958′ strokes you into an embrace rather than pulverising you with a message, working like a balm of seductive tenderness rather than a weapon of revenge.  Imagine an artist with the gently subversive touch of Bon Iver, the haunting falsetto of Skip James, the razor-like mind of Akala and the inventiveness of Moses Sumney. 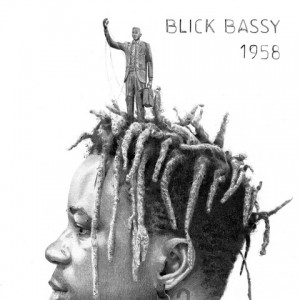 ’1958′ is co-produced by Blick Bassy and Renaud Letang. It will be available UK-wide on Friday 29th May 2020 via No Format/Tôt ou Tard.