Today, CAESAR SPENCER announces the Autumn release of his new album: ‘Get Out Into Yourself’. Primed for release on the 4th November 2022 (via New Radio Records), it will present 11 tracks of cinematic baroque-pop and classical songwriting imbued with a warm feeling of familiarity while also defying easy categorisation.

In anticipation of the release, Caesar is pleased to present its lead single: “Waiting for Sorrow” with an official video, which is available to view now here:

With its lush production and a loquacious lyrical style laid-down by Caesar’s rich, earthy baritone, “Waiting for Sorrow” is a swelling and heartfelt tribute to the acclaimed Irish playwright Samuel Beckett (“Waiting for Godot”) who, like Caesar Spencer, was also a Paris resident for much of his adult life. As in the play, “Waiting for Sorrow” explores the symbiotic (or even solipsistic) nature of relationships. This is a key concept which is further developed throughout the rest of the album.

From the radio static that welcomes the listener in, to its ricocheting rhythm sections and its soaring guitar break; “Waiting for Sorrow” is at once billowingly epic in its delivery, smoulderingly suave in its stylistics and brightly effervescent in its ambitions. Providing the single with a certain vintage panache, Jacqueline Taïeb, an artist who very much embodies the French yé-yé spirit of the 60s, also offers her inimitable vocals to the recording. 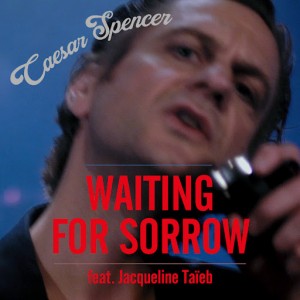 Continuing a long line of classic songwriters, from Scott Walker to Lee Hazlewood, Morrissey to Peter Doherty, who have long looked beyond their patch for inspiration and a deeper sense of connection, Caesar Spencer is an artist whose music could not have been born from residing in one country alone. An Englishman born in Peru, Caesar Spencer also happens to be Swedish, but now finds himself in France.

Feeling musically uninspired by his humdrum life in Blighty and sensing an air of Brexit around him, Caesar made the conscious decision to move to Paris in search of new opportunities and a fresh fountain of creativity.

Dreaming of drawing upon his musical loves that had lit up his life on the other side of the channel (The Kinks, Bowie, The Smiths), while infusing them with a certain French kind of sensibility and sophistication, he began
mapping-out a blueprint for a wildly ambitious new record.

Broadly echoing his own journey to date, ‘Get Out Into Yourself’, is a concept-album-of-sorts; inspired by those with nomadic origins and their search for identity. With a loose narrative that follows a protagonist journeying through different cultural landscapes, the record unspools a tale laced with existential questions and the quest to find yourself in an ever-shifting world.

Given that kind of context, it’s perhaps fitting that ‘Get Out Into Yourself’ is very audibly a record that transcends genres and borders at every turn too. Flickering from winsomely British pastoral-pop (“Isn’t That What Jimi Said”), to gnarly West Coast surf-rock (“Hail Caesar”), to provocative French cinema-styled scorings (“When I Whisper In Your Ear”) to cosmic crooner ballads beamed direct from the Bowie-verse (“Requiem”), every corner of ‘Get Out Into Yourself’ is illuminated with an incandescent imagination and international spirit.

Perhaps most of all, ‘Get Out Into Yourself’ is a loving tribute to France, a nation that single-handedly rekindled Caeser’s creative spark. The recording of the album gave Caesar an opportunity to pay homage to a remarkable
musical heritage that too often goes unrecognised. As Caesar explains:

“It’s simply a love letter to France. I wanted to give something back to a country that has given me so much. And I really wanted to shine a light on this incredibly sophisticated French musical artistry. They have a way of doing things here which is unparalleled elsewhere. It’s phenomenal and strangely enough not so well known outside of France. They should get more cred!“

Once established in his new base of Paris, Caesar began recording at the Studio La Fugitive (where acclaimed French band Les Rita Mitsouko recorded) with esteemed producer Gaétan Boudy (Zaz, Alex Renart, Emel Mathlouthi). Actively seeking to celebrate France’s breadth of musical talent past and present, he began to enlist a stellar cast of musicians to give the record a palpable flavour of the continent. Alongside the aforementioned performance by 60’s chanteuse Jacqueline Taïeb (on “Waiting for Sorrow”), there are also appearances from celebrated French artist Jean Felzine (Mustang) and his frequent collaborator Jo Wedin. The French punk icon Gilles Tandy (Les Olivensteins) also lends his talents to the album. Most striking of all is the brooding baroque pop centre-piece “When I Whisper In Your Ear”; a smouldering track that sees Caesar joined in an impassioned duet with the multi-talented Mareva Galanter (who has several albums under her own belt, one of which was recorded with half of Primal Scream), alongside a transcendent accompaniment from opera star Aurélie Ligerot and backed by the cinematic orchestration of FAME’S PROJECT (Jarvis Cocker, Chilly Gonzales, Jurassic World…).

“I wanted to capture the essence of a Serge Gainsbourg song in English” muses Caesar of the track. “Many have tried but I don’t think anyone has really been able to pull it off.”

Bringing his vision into vivid focus, ‘Get Out Into Yourself’ was finessed with assistance of his formidable backing band which includes Fred Lafage (Tony Allen, Paris Dernière) on Guitars / bass / keyboards and Frantxoa Erreçarret (Askehoug, Barcella) on Drums.

Finalised in 2022, its 11 songs interweave into a record that knows no boundaries and dares to dream beyond constraints. Deftly bridging the channel between British and French pop, Caesar Spencer delivers a richly rewarding trove of songs of a classic calibre and a bespoke elegance. A tender homage to that eternal feeling of finding home, when ‘Get Out Into Yourself’ arrives this November, it will finally be time to “hail Caesar”.

* * * * *
‘GET OUT INTO YOURSELF’ – TRACKLISTING
i. hail caesar (feat. gilles tandy & jean felzine)
ii. get out into the pigs
iii. isn’t that what jimi said (feat. jean felzine & jo wedin)
iv. when i whisper in your ear (feat. mareva galanter)
v. jane loves the highway (feat. gilles tandy)
vi. requiem
vii. cult of personality
viii. broken by the song
ix. waiting for sorrow (feat. jacqueline taïeb)
x. get out into yourself
xi. knew that one day (feat. jean felzine & jo wedin)

In accompaniment to the album, French artist Thierry Beaudenon has elegantly illustrated the narrative of ‘Get Out Into Yourself’’ with a Lichtenstein-style storyboard. A vivid comic book-style booklet, the artwork will be available with all physical editions of the album. 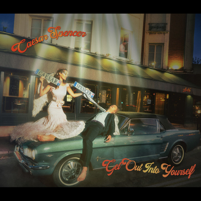 CAESAR SPENCER – WILL RELEASE NEW ALBUM: ‘GET OUT INTO YOURSELF’
– OUT 4 NOVEMBER 2022, VIA NEW RADIO RECORDS

“Here is a man, you start to think, with a stubborn will to translate the untranslatable. Perhaps he is, but more importantly his songs have a confessional rawness and a melodic swagger that are borderless.
An excellent debut album”
PAUL DU NOYER, MOJO

“A gorgeous affair, pulling in influences from Bowie, Scott Walker, and ’60s Parisian pop while also containing hints of Ian/Baxter Dury too. There is a lot to love. All in all, quite magnificent”
RECORD OF THE DAY