Surf’s up! CAPTAIN RICO AND THE GHOST BAND release the retro/rock thrills of their new album: ‘THE FORGOTTEN MEMORY OF THE BEACHES’ today (24 Sept).

In celebration of the new record, the French surf rock trio are pleased to present a radical new video for one of its most exhilarating highlights: “Mexican Road Trip”.

Directed by Sylvain Montet, the video was shot amidst the breathtaking scenery of the La Pierre Saint-Martin mountain ranges in the Pyrenees. It’s stunning visuals follow a fearless longboarder as he makes a nerve-shattering descent through the perilous mountain pass; with Captain Rico sound-tracking him every inch of the way.

An instrumental with Tex-Mex flavours and far-out, exotic arrangements, “Mexican Road Trip” takes inspiration from Captain Rico & The Ghost Band’s passion for travel, touring and discovery. Speaking about the track and video, Damien Ricaud of the band says:

“What inspired the music for this song? The country of course! But also the desire for long journeys, improvised meetings and all the adventures that this can entail. Personally, I love Mexico and hope to go there one day. For the video we wanted to represent what could be a stopover somewhere in Mexico.”

“Mexican Road Trip” is just one of 12 rollicking, vintage rock’n’roll nuggets to discover on their new album: ‘THE FORGOTTEN MEMORY OF THE BEACHES’. It’s a nonstop surf-rock album that sees the band take the sounds of 1960s Southern California and give them a rejuvenating new purpose from their base in the South of France.

Made up of Damien Ricaud (Guitar), Yves Manceau (Percussion) and Ludovic Timoteo (Bass), Captain Rico And The Ghost Band passion for surf-rock is the cornerstone for their psychedelic, mind-melting sound. The Toulouse-based group pull from a range of influences, while still staying true to their vintage roots. Major bands from the mid-20th century such as The Shadows, The Beach Boys, and The Ventures have all been cited as major inspirations to the group’s sound, as they try to recreate the carefree attitude that was integral to the surfer culture they adore. It was this passion, plus their impressive musical knowledge then, that inspired the group to record a group recorded an album that immersed itself in nostalgia with a mesmerising effect: “The Forgotten Memory Of The Beaches”

Atmospheric and enticing, surf-rock, and the culture surrounding it is the cornerstone of the album, working its way into every track. Bouncing between elements of straight rock, Indian-inspired tempos, and elements of pop. What emerges is an album that feels like a journey- taking the listener from the everyday 21st century living, to a carefree 60s summer, full of beaches, laughter and the weight of a blazing sun. Through “The Forgotten Memory Of The Beaches”, Captain Rico And The Ghost Band have created an album that evokes feelings of sun-filled euphoria that will stay with the listener long after hearing it. 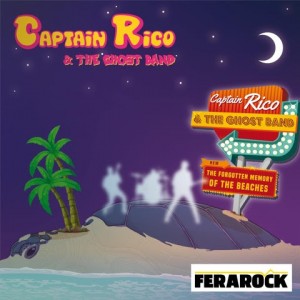 CAPTAIN RICO AND THE GHOST BAND

‘THE FORGOTTEN MEMORY OF THE BEACHES’

IS OUT TODAY (24th SEPTEMBER), VIA SPIDER MUSIC