“Here’s the most important thing you need to know about Children Of The State. They’re just a band for us to exhale and do something real simple to” - So Young Magazine

“It’s clear Children of The State aren’t short of confidence.” - Louder Than War

Today, Manchester based, Yorkshire born CHILDREN OF THE STATE take a journey to the darker recesses of their music palettes with the release of their new EP, ‘Tragic Carpet and the Magical Wasp Gang from Notre Dame’.

Injected with the sense of unease and paranoia the whole world is feeling right now, the four-track EP sees the band veer away from the sunny, retro sound of their previous works in order to reflect our current environment.

Overseen by The Coral’s Ian Skelly, the use of an old, broken tape machine combined with the squealing horns of lead single ‘Hot Money’, the swirling, Zombies inspired ‘On A Clear Day You Can See Forever’ and the stomping nostalgia of ‘Baby, Can You Dig Your Man?’ and ‘Give Up The Ghost’ enhances said unease; giving the feeling that something isn’t quite right.

Having stormed through the chaos of 2020 with newly gained fans in the likes of BBC Radio 1’s Huw Stephens, BBC 6 Music’s Steve Lamacq and Radio X’s John Kennedy as well as CLASH, DIY, So Young, Shindig!, Fred Perry Subculture, Metro & many more, Children of the State are now ready to make waves from their new Manchester base.

Made up of John McCullagh, Nathan Keeble, Corey Clifton, Conor O’Reilly and Harry Eland, the band’s blend of 70s glam rock, 60s nostalgia and electronica influences have landed them festival slots at the likes of Tramlines, Circafest and YANA Festival as well as support slots with Temples, The Mysterines and Elephant Stone – and a riotous sold out headline show at their native The Leadmill in Yorkshire. 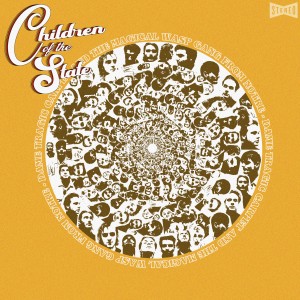 CHILDREN OF THE STATE -

‘TRAGIC CARPET AND THE MAGICAL WASP GANG FROM NOTRE DAME’