‘EYES OF A CHILD’ A NEW SONG FOR AMAZON ORIGINALS’ HANNA

Christine and the Queens today shares a brand new song ‘Eyes of a child’, created for the second season of the Amazon Originals series Hanna. ‘Eyes of a child’ is available to stream and download via all digital platforms.

Listen to ‘Eyes of a child’

‘Eyes of a child’ follows February’s surprise release of Christine and the Queens’ La vita nuova EP and short film, imagined by Christine and featuring the EP’s five new songs in as many sequences. The 14 minute film is an inward journey that sees the artist invest Opéra Garnier, the world famous Paris opera house, filling it with stories of ghosts and mythical creatures. Through the lens of long-time collaborator Colin Solal Cardo (Robyn, Charli XCX) and with choreography by Ryan Heffington (VMA Award 2014, Grammy Award nominated), Christine and her dancers appear in succession on the Opéra rooftop, its grand stage and most secret recesses, culminating into a feverish moment with Caroline Polachek, a collaborator on the EP’s title track. The EP was acclaimed everywhere from Vogue to NME to the Sunday Times, and lead single ‘People, I’ve been sad’ has since been named one of the year’s best songs by Time Magazine, NPR, Billboard and i-D. Last week PAPER magazine debuted its cover story “Christine and the Queens was born to rule”.

Last week Christine took over Le Grand Palais, another Parisian landmark, performing the EP’s title track ‘La vita nuova’ for Global Citizen’s Global Goal: Unite for Our Future. The acclaimed performance followed her invite to Global Citizen’s One World: Together at Home event in April, where she performed ‘People, I’ve been sad’ from her bedroom to celebrate and support healthcare workers in the fight against the COVID-19 pandemic.

Christine has appeared on high profile shows worldwide for unique performances of songs from La vita nuova, including ‘I disappear in your arms’ for The Tonight Show Starring Jimmy Fallon, directed by her frequent collaborator Colin Solal Cardo at Paris’ La Cigale; ‘People, I’ve been sad’ live from her window in Paris for The Late Show with Stephen Colbert; and ‘I disappear in your arms’ for The Graham Norton Show. During lockdown she has also performed a raft of unique self-produced cover versions of the likes of The Weeknd, Travis Scott and Neil Young, available to watch via her YouTube channel. 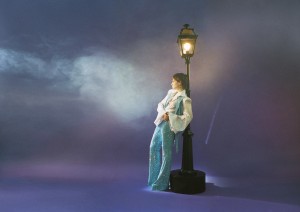 “an astonishing and emotional sucker-punch” – 5*, NME

“The dazzling EP is a subtle gesture about grace and interiority and the illusion of effortlessness, the same attributes that mark Chris as a true star” - 7.8/10, Pitchfork

“some of her most beautiful vocals to date” – Sunday Times Culture

La vita nuova follows 18 months of live shows, collaborations and international distinctions, around the release of Christine and the Queens’ breathtaking second album. Chris was written, arranged, produced and performed by Christine and the Queens, and charted at #3 in the official UK album chart; it has been certified silver in the UK. Chris is the follow up to her already-iconic debut record Chaleur Humaine, released to near-universal acclaim in France in 2014 and the UK in 2016, and selling more than 1.4 million copies worldwide to date. Most recently, Christine and the Queens collaborated with Charli XCX on the acclaimed single ‘Gone,’ released last autumn and a mainstay of 2019’s end of year lists.

Chris and its acclaimed songs made multiple 2018 year-end lists and was named Album of the Year by The Guardian, The Independent, iPaper, Evening Standard and Clash Magazine; the record’s lead single ‘Girlfriend’ was Track Of The Year in Time Magazine, Dazed and MOJO. It was also featured by, amongst others, The Sunday Times, Daily Telegraph, The Observer, Q, Uncut, Pitchfork, Noisey, The FADER, Crack & The Line of Best Fit. Christine and the Queens received her second nomination for International Female Solo Artist at the BRIT Awards 2019, was named Q Icon at the Q Awards 2019 and won the Artist Award at the Attitude Awards 2019. She starred in numerous artist, album and song of the decade lists by Pitchfork, NME, Consequence of Sound, Paste & more.