Continuing his no-nonsense approach to 2021, Darling BOY, the alias of actor, writer and musician Alexander Gold today shares the brand new animated video for his latest single, ‘Tea Drinkers of the World’.

Wanting to steer away from common indie-pop themes, the new video is Gold’s take on visual joy. Animated and directed by Matt Hutchings, it takes Darling BOY back to his childhood love of classic 16-bit gaming.

“One of the big misconceptions bands have, is that the concept of watching them play a song from start to finish in a room makes an entertaining music video. It does not”, tells Gold.

“With this in mind, for Tea Drinkers I wanted to put something together that was a joy to look at, told a story and was festooned with colour to counteract these grey old times. I used to be a huge gamer as a kid and thought a classic 16-bit look would be a timely throwback to a more innocent, simple age, where a pandemic was something that happened on a busy kitchen-top. Matt Hutchings who directed and animated the video was also a gamer and knew exactly where to take the concept. He’s done an incredible job… he even made a sprite out of my Gretsch White Falcon – for this alone I will love him forever!”

Recorded at Warwickshire’s Vada Studios (Laura Mvula, You Me At Six, The Darkness), produced by Gold himself alongside Matt Terry (The Enemy) and mixed by Gethin Pearson (Kele, Charli XCX), ‘Tea Drinkers of the World’ finds Darling BOY allowing his music to do all of the talking.

“I love that notion that once a song is out there it’s everyone else’s to make sense of. And why waste all that energy writing four verses, two bridges and a chorus when one line will do perfectly if you do it right?”, he says.

Coming in at just under 2 ½ minutes of nostalgic, gritty guitar-pop; the resulting single is a winning anthem boasting a hook worthy of the biggest of stages. With all distractions stripped away, ‘Tea Drinkers of the World’ shows Alexander Gold and his knack for quality, addictive songwriting for exactly what he is; bounding with potential and ready to tackle the new year with all he has. 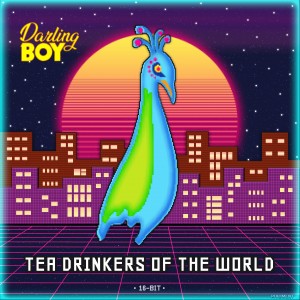 Darling BOY, or Alexander Gold, is an entirely self-taught multi-instrumentalist, songwriter and actor. He’s starred alongside Jonathan Rhys Meyers’ Joe Strummer as The Clash’s Topper Headon in the feature film London Town, and more recently named as Musical Director of the smash hit musical All Or Nothing in London’s West End having played Ian ‘Mac’ McLagan of Small Faces and The Faces and is playing John Lennon as part of one of the world’s biggest cruise ships’ resident Beatles. He’s a member of The United Kingdom Ukulele Orchestra, been a guest of Dolly Parton in deepest Tennessee and asked to join two – two! – of Libertines mainman Carl Barât‘s bands. He’s been a member of Joey Ramone’s favourite band of all time, got talked out of setting up a London squat by Sex Pistol Glen Matlock, and been taken out for dinner by Moby. Gold also recently joined Supergrass’ Danny Goffey’s new band, switching between bass, guitar and drums.