Celebrating the 10th anniversary of his debut album - DARWIN DEEZ – will be embarking on a string of UK + IRISH live dates this Spring.

With 10 dates altogether, Deez will be performing the album live and in-full at the following cities:

Tickets for all dates are on sale now here:
https://www.darwindeez.com

Upon its release in April 2010, Darwin Deez’s debut album was met with universal praise from international media. Now, in order to celebrate the 10th anniversary of the release, the album will be performed in its entirety at a number of live shows across the UK. Renowned for the most entertaining performances, with added choreographed dance routines, don’t miss your chance to witness a rare insight into everything a pop star should be, and yet so rarely is.

Championed by the likes of BBC Radio 1 and the NME, the latter even named him the 10th coolest musician on the planet as he graced their cover. There was nobody around quite like Darwin, and his wonderfully off-kilter debut album is testament to that fact.

Recording the album in his own apartment using only a PC and a cheap microphone – he can lay a claim to being the original indie ‘bedroom’ artist – the songs are mostly stripped down, simple and unadorned but they pulse and throb deliciously with life and a rare wit. Certainly, it would be hard to think of anyone else who can start a song by cribbing “Twinkle Twinkle, Little Star” as the opening line (as on ‘Constellations’), while rhyming “Los Angeles” with “televangelist” (as on ‘Radar Detector’). However, it is also important to note that there is also an emotive undertow of sadness and longing in his oeuvre. By turns joyous and heart tugging, winsome and wistful, glorious and gorgeous, buoyed aloft by Deez’s ear for a soaring chorus and a catchy tune, not to mention his knack for a killer couplet, Darwin self-proclaimed the album as being ‘happy songs for sad people’. 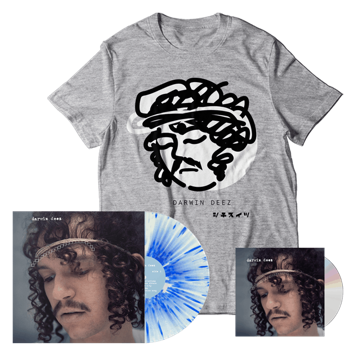