LISTEN TO ‘COME OVER HERE’ HERE

A new project albeit with some familiar faces from the Manchester music scene, DoveTales, are pleased to introduce themselves with a new EP: ‘The Lamplight Sessions’, plus a smattering of shows across the North-West this Autumn.

Infusing the indelible harmonies and intricate guitar janglings of sixties folk groups, with a Brit rock-ready strut and a seventies’ country-soul cool; DoveTales offer a sound that is at once classic and immediately refreshing.

DoveTales are fronted by chief vocalists and songwriters, Stef Rose (formerly of The Sylvias and Wild Ginger) and Happy Mondays/Hippy Mafia guitarist Johnny Evans. With their roots in Scandinavia and Mancunia respectively, the pair’s cultural exchange of contrasting, yet complimentary vocal styles, lyrical turns-of-phrase and artistic-inspirations shape the heart of DoveTales’ nuanced palette. Accompanied by the capable rhythmic pedigree of drummer Chris Joyce (perhaps best known for his work with the Durutti Column, The Mighty Wah!, and Simply Red), plus former Hollie Cook bassist Victor “Fela” Freeman on bass, the band come together with one pure resonance to land upon a a sound of soaring fullness and warming depth.

Having first met through previous project The Sylvias back in 2008, for Stef, Johnny and Chris, in many ways DoveTales represents a coming together of old friends with a newfound sense for musical adventure.

Supporting the likes of the Happy Mondays, Sophie Ellis Bexter and Mark Ronson, the trio played shows to many adoring audiences, yet never released any music under The Sylvia’s moniker. Hooking up once some 11 years later, the trio found they still had much in common. With a shared vim for a new creative project, the trio rekindled musical activities together and soon set about writing material together. Inviting Fela into the frame, the four piece hit upon an instant chemistry and ploughed their joint passions for great music (with inspirations including the familiar CSNY, Fleetwood Mac and The Beatles; to the more esoteric like Miles Davis, Lee ‘Scratch’ Perry to The Bulgarian Singers) and top-notch Indian food, into jamming sessions together and formed the foundations of something special.

Shacking up at the Sulking Shed Studios in West Yorkshire, they began laying down a treasure trove of original and infectious songs with soul searching lyrics and beautiful harmonies. And, the first fruits of these recordings will emerge this Autumn, to be heard in their upcoming EP: ‘The Lamplight Sessions’.

The four tracks ‘Bully’, ‘Come Over Here’, ‘You And I’ and ‘M6’ were recorded under the watchful eye of esteemed engineer and EP co-producer Greg Turner (From The Kites of San Quentin / We The Dead), and will be released via AWAL on 11th October 2019.

After a summer hiatus from playing together, DoveTales now look to air their new songs at a series of gigs on live stages across the Northwest, which include a special hometown residency of shows at Salford’s Eagle Inn. Headlined by DoveTales, ‘The Lamplight Sessions @ The Eagle’ residency series will see the band showcasing old and new tunes from their ever expanding repertoire once every month until Christmas. Featuring especially curated guests for each of the nights, the shows are guaranteed to be an individual, inviting and engaging live experience.
Don’t miss DoveTales at the following dates and venues as follows: 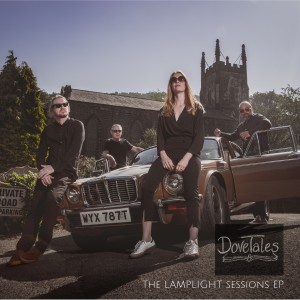