SHARES “SOMETHING IN THE WAY” (NIRVANA COVER)

‘THE TUNIS DIARIES’ OUT OCT 23RD VIA PARTISAN

Today, Tunisian-born/New York-based experimental singer Emel has shared two tracks from her forthcoming project ‘The Tunis Diaries’ – a two-part album featuring a collection of newly recorded reworks from Emel’s catalog (‘Day’), and an eclectic selection of covers (‘Night’). Listen to Emel’s raw and striking cover of Nirvana classic “Something In The Way,” as well as a new stripped-down version of “Merrouh,” which originally appeared on her latest album ‘Everywhere We Looked Was Burning’ (2019).

Emel – “Something In The Way” (Nirvana cover)
Emel – “Merrouh”

Emel recorded ‘The Tunis Diaries’ in Tunis after she was unexpectedly quarantined in her childhood home this Spring. Equipped with only a laptop, tape recorder, and a classical guitar she crowdsourced from a local fan via Facebook, the project is a back-to-basics exploration of Emel’s roots, as well as a spontaneous and complex reflection on her relationship to her homeland. She has previously shared two additional songs – “Holm,” an original which was first released alongside a self-shot music video (2M views and counting) this April, and a cover of David Bowie’s “The Man Who Sold The World”.

Emel’s previous album – ‘Everywhere We Looked Was Burning’ – was released last year via Partisan and received some of the best reviews of her career. It was her first sung almost entirely in English after previously only recording a handful of tracks in the language, with NPR declaring her “the 21st century catalyst for change”. Watch the poignant music video for the title track, which and features relevant images of turmoil and conflict from around the globe: HERE

‘Night’:
1. Something In The Way (Nirvana cover)
2. The Man Who Sold The World (David Bowie cover)
3. Sabbath Bloody Sabbath (Black Sabbath cover)
4. Every You Every Me (Placebo cover)
5. One Of Us Cannot Be Wrong (Leonard Cohen cover)
6. Frühling in Paris (Rammstein cover)
7. Aerials (System Of A Down cover)
8. New Year’s Prayer (Jeff Buckley cover)
9. War Child (The Cranberries cover) 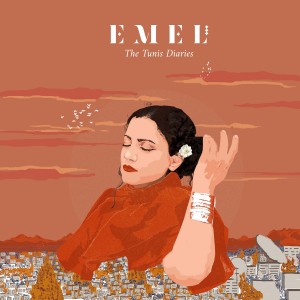