ANNOUNCES THE PREMIERE OF: ‘INTO THE DARKNESS: FRED DEAKIN AND THE LASTERS’- A NEW FILM BY PAUL WYATT -

FRED DEAKIN is delighted to present a new film: ‘Into The Darkness: Fred Deakin And The Lasters’.

Exclusively premiering on Friday 5th March 2021, the film will document Deakin’s journey post-Lemon Jelly as he takes his ambitious AV project: The Lasters, to the live stage for the first time.

Back in the early noughties, Fred Deakin was one half of Mercury Prize and BRIT Award-nominated duo Lemon Jelly who brought a sophisticated and happy blend of pop electronica to the world which entertained thousands at gigs and festivals. After releasing three full-length albums and much to the disappointment of their fans, Lemon Jelly stopped operations in 2008.

Now, Fred Deakin is heading back to the live stage with a new band featuring Charlotte Hatherley, formerly of rock band Ash, Abi Sinclair (Bat and Ball), Steffan Huw Davies (C A S T O R P) and an ambitious new concept album called The Lasters which follows in the tradition of The Who’s Quadrophenia and Jeff Wayne’s War of the Worlds.

Director Paul Wyatt’s film, ‘Into the Darkness’, chronicles Fred Deakin as he brings his “daring and stratospherically out there” musical passion project to life via his career as a DJ and club promoter to his highly-regarded and collectable work as an artist and designer which pioneered the vector art-aesthetic.

Speaking about the new film Deakin says:  “In late 2019 we played two live Lasters shows for our Kickstarter backers in preparation for a UK tour. We all know how that went, but fortunately the shows were filmed, as was our rehearsal process, by documentary master Paul Wyatt, and now we have Into The Darkness, a 90 min film with animation and gig footage! Join us online for the premiere on Friday 5th March at 8.30pm UK time – it might well be the closest you ever get to seeing us play the album live…”

An experience that promises to be out-of-this-world, ‘Into The Darkness: Fred Deakin And The Lasters’ will be premiering online on Friday 5th March @ 8.30pm UK time. 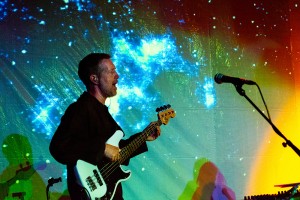 PRAISE FOR FRED DEAKIN & THE LASTERS

“Like vintage Doctor Who at its best” – ELECTRONIC SOUND