NEW ALBUM SKELETON AT THE BANQUET OUT TODAY

“This song poses a question I started asking myself a long time ago. What if nobody’s coming? What if this is it? What if we take the responsibility of saving ourselves and our collective home?” – Gill Landry

Nobody’s Coming is the second single to be taken from Gill Landry’s new album, Skeleton At The Banquet, released today on Loose. Gill describes Skeleton At The Banquet – his fifth solo outing and first album since 2017’s Love Rides A Dark Horse - as “a series of reflections and thoughts on the collective hallucination that is America.”. The album has received high praise from critics and the growing consensus is that it is Landry’s most accomplished solo work to date.

“Already a Grammy winner and Grand Ole Opry inductee with his former band, Skeleton At The Banquet deserves to see him hitting similar heights again… A career peak”

“Dark, perfectly weighted fifth from US folk songwriter… Landry is a master of the smouldering cowboy ballad”

“a hugely accomplished and at times troubling album that has already earned its place in “Best Of” year-end lists. Enjoy the feast.”

To promote the release of the album, Landry will be touring the UK and The Netherlands, kicking things off in London on the 28th of January with a slot at the Americanafest UK Showcase Festival, followed by an in-store performance at Rough Trade East. The full list of tour dates can be found below and tickets are on sale now, here. 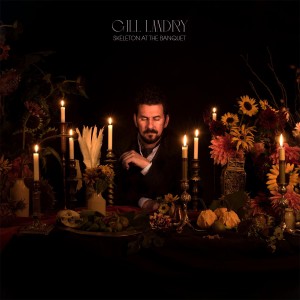 Gill Landry – Skeleton At The Banquet

Skeleton At The Banquet is the new album from two-time Grammy award-winning singer-songwriter and multi-instrumentalist, Gill Landry.

Landry was originally from Louisiana and started out as a busker on the streets of New Orleans before becoming a contributing member of the band Old Crow Medicine Show with whom he recorded 4 albums and toured from 2004 to 2014. He’s released 4 solo albums to critical acclaim, featuring such artists as Laura Marling, Brandi Carlile, Klara Söderberg (First Aid Kit), The Felice Brothers and Karen Elson among many others. Landry has toured extensively internationally in his own right, and has also supported Mumford & Sons, Brandi Carlile, Ben Harper, Laura Marling, Ben Howard and Bruce Hornsby.

Skeleton At The Banquet is Gill Landry’s fifth solo studio album and the follow-up to 2017’s Love Rides A Dark Horse (Loose/ATO). “This album is a series of reflections and thoughts on the collective hallucination that is America,” he tells us. “With a love song or two thrown in for good measure. I wrote it from within the refuge of a small flat, in a small village in western France where I spent last summer. I found it to be a good place for seeing the forest through the trees, so to speak.”

Skeleton At The Banquet is out now on Loose on LP, CD and digital.