As its title may suggest, this previously unreleased demo was originally intended for use in the BBC’s hit adaptation of Philip Pullman’s ‘His Dark Materials’ that broadcast last Winter. Though eventually unused in the final soundtrack, McCusker has unearthed this elegant piano piece from his personal archives for fans of the fantasy series to enjoy while in lockdown.

As an added gesture in these uncertain times, McCusker will be donating all proceeds from the release to The Christie NHS Foundation Trust in Manchester.

A celebrated composer, musician, performer and alumnus of the Royal Northern College of Music, Graham McCusker was enlisted to work as a composer and musical director on the ‘His Dark Materials’ series back in 2018. McCusker’s skilful ability to create Gaelic-inspired compositions with ancient, enigmatic and enchanting qualities, caught the ear of the director Otto Bathurst.

Invited on-set while the production was filming in Wales, McCusker’s pieces struck a chord with many of the cast and crew, garnering support in particular for his compositions intended for the characters of ‘The Gyptians’. While on set, McCusker had the tough task of conducting and directing over 200 people cast as Gyptians to sing his works. This included one-on-one coaching with BAFTA award-winning actress Anne Marie Duff, who plays central character Ma Costa, to bring the memorable ‘Gyptian Settling Song’ (heard in Episode 1: Lyra’s Jordan) to life.

Reflecting on the experience, McCusker says: “The set, cast and directors were all absolutely fantastic, they made me feel very welcome. They were an exceptionally talented group of people at the top of their game. Easy to work with and responded very quickly to the directions and ideas I gave them.”

Following the initial brief to write vocal music for the Gyptians, tracks such as the haunting ‘Dear Boy’ (heard during the emotional funeral scene in Episode 5: The Lost Boy), and ‘Ma Costa Song’ (also written for Anne Marie Duff’s character), were felt to adeptly capture the spirit of the show. This saw McCusker invited to offer further tracks for the series, including the sinister ‘Gobbler Song’ (as heard in Episodes 1 & 2), as well as a wistful piano piece intended to accompany solo scenes of the show’s solitary leading protagonist Lyra Silvertongue (acted by Dafne Keen). Grammy-award winning composer Lorne Balfe, was later named for the series’ overall Post-Production music.

During production, McCusker’s ‘Theme for Lyra’ went unused in the final cut and almost disappeared between the cracks forever… Re-discovering the music in his archives months later, McCusker has decided to share a composition for the world to enjoy. Something of an unofficial bonus entity for fans to immerse themselves in, McCusker hopes it may help to inspire the imaginations of those who find themselves in their own solitude right now:

“I wrote a small piano demo of a song I wanted them to use for Lyra’s character, as a theme for a time when Lyra is alone or in deep thought. When she has moments of feeling sad, unsure or scared of what the future holds. For instance, in reference to the book, it could have been used when Lyra falls asleep in the balloon, just after she speaks with Serafina Pekkala and they are flying across miles of sky to Svalbard and she wraps herself up in a pile of furs as they float away in the night sky. It could possibly have been seen as ‘the calm before the storm’.”

Now available to download on Graham McCusker’s Bandcamp, the track is priced at just 99p, with the proceeds of all sales going to The Christie NHS Foundation Trust in Withington, Manchester. A former patient of the specialist cancer treatment hospital himself, McCusker’s gesture comes in response to the current coronavirus crisis and reports of the disruptive knock-on effects it will have on those awaiting vital cancer care. Last summer, McCusker raised £2,500 for HaTS, a voluntary charity within The Christie Charitable Fund, by cycling the North Coast 500 in 7 days. In this hour of need, McCusker is keen to assist the institution again, with a little guidance from Lyra’s own heroic spirit. 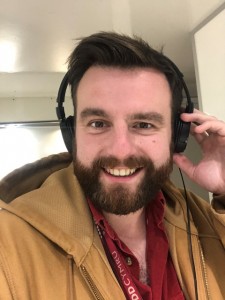 Graham McCusker on the set of His Dark Materials

Graham McCusker was born in Glasgow, Scotland and raised in Paisley. Attaining his undergraduate degree at the Royal Northern College of Music in Manchester, he has gone on to establish a reputation as a composer, performer and creative. While he regularly composes music for Oxford University Press and many other publishers, McCusker also sings with the BBC Daily Service Singers and is a Lay Clerk at Manchester Cathedral. His vocal talents have also seen him perform with Boy George’s Culture Club and Clean Bandit at live broadcasts on BBC Radio 1 and 2, as well as tour with Hans Zimmer on his 2017 live tour. Extending his talents to the opera world, McCusker was due to be singing with Scottish Opera this Spring, and is eager to resume his duties with them when safe to do so again.