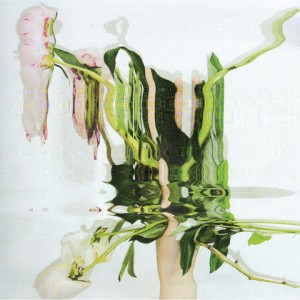 Italo-Brazilian two-piece – HATE MOSS – have unveiled the new video for “Pensar”, a cosmic accompaniment to new album ‘NaN’ (out today).

Fusing space-age beats with industrial-tinged instrumentals, a catchy chorus and trance-like melodies, the song sees the band in collaboration with the Brazilian artist Isis Broken, who adds a tint of South American hip-hop to Tina and Ian’s distinct vocals.

The duo’s latest single “Pensar” is paired with an eerily futuristic official video, made in collaboration with the 3D artist Peu Ribeiro. Traversing a surreal dystopian landscape full of extraterrestrial motifs and end-of-the-world animations, the video evokes the image of a world on fire. As danceable earworm beats are accompanied by cataclysmic imagery, Hate Moss hold an ominous mirror up to each of our own actions in an increasingly warped and unequal society.

Speaking about the mesmeric new video, the group explain:

“In an almost didactic way compared to the song’s lyrics, the protagonist is a homeless man who finds himself witnessing the chaos created by modern society, to whom the giant heads of Tina and Ian ask to wake up and react to overturn a wrong “normality”. All in an atmosphere that mixes GTA and video games set in space.”

Following on from the two-piece’s earlier singles, including the minimalist lo-fi cut “Eremita”, twisted love song “Peonia” and the techno-tinted “Stupid Song”, “Pensar” is plucked from their second album ‘NaN’, out today. Written and composed by Hate Moss, mastered at Somerset’s Loud Mastering Studios by Jason Mitchell and co-produced by the band in collaboration with In A Sleeping Mood, the record is released via Stock-a Production (Italy-UK), Before Sunrise Records (Brazil) and Rock City (LATAM).

In computing, ‘NaN’ (/næn/), means “Not a Number”, a data type that can be interpreted as a value that is undefined or unrepresentable. This title represents the main theme of the album: the alienation that arises when society treats human life as the result of a cold calculation.

Drawing on the mixed heritage of the band, the many strands of musical influence they share, and the upheaval of moving and regrouping during the pandemic, Hate Moss explain of the inspiration behind ‘NaN’:

“The inspirations range from The Prodigy and Massive Attack to Death Grips and Dead Can Dance. These are superimposed on the work of the great Italian traditional songwriters, such as De Andrè, and Brazilian composers such as Caetano Veloso.  We must also add the influences of the new beats of Rio funk, drone guitars and Turkish flutes.”

Touching on the various places they have lived and cultures they are intertwined with, the album also sees lyrics written and performed in a variety of languages, from English to Italian, Turkish and Portuguese. The two-piece add:

“We cannot deny the emotional bond we have with some languages because they are part of our culture, like Italian and Portuguese, or simply because they mirror a culture and a place that welcomed us and made us become what we are, like English. On this album, a song in Turkish is added for the first time to emphasise the importance of the places where we have had the pleasure to perform.”

Taking a more commercial approach to music-making than on their earlier releases, ‘NaN’ blends a more accessible production style with heavier and more hard-hitting lyrics. Grappling with “the aspects of human life that are often reduced to cold calculations”, the album tackles a range of complex themes from the difficulty of mourning and the feeling of total helplessness on “Neve”, to societal injustice on “Fog” and from the sadly common story of deaths in the Mediterranean on “Dei Buoni Dei” to themes of suicide and the need to escape discomfort on “Stupid Song”.

Hate Moss is an Italo-Brazilian duo formed by Tina and Ian in 2018. Starting out in London and  currently living a nomadic existence, the duo have performed on numerous stages across South America, Europe and the Middle East, while drawing crowds at international festivals like the Venice Biennale (IT), Locomotiva Festival (BR) and Goiania Noise (BR), earning a cult following in the process.

Immersed in the spheres of electronica, post-punk, industrial and electroclash, Hate Moss’ genre-bending sound is the result of their multicultural heritage and definitively dark sonic palette. Taking inspiration from the music scenes of the multitude of countries that have welcomed them, the band’s lyrics blend artful observations with fluent shifts in languages and an idiosyncratic sound coloured by instruments they have adopted on their trails.

Hate Moss released their first LP ‘LIVE TWOTHOUSANDHATEIN’ through their label Stock-a in collaboration with the South American Discos Rebeldes. It was recorded in one take at Relaxo Studio in Florence, Italy and mixed/mastered at Fine Arts Studios in London, UK. 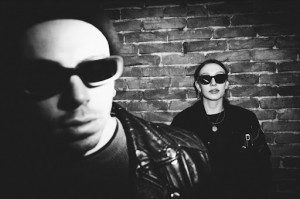 For fans of: The KVB / Nine Inch Nails / The Kills