HELLO COSMOS are back with the brand new single “Hard Enough To Start With”.

Exclusively taken from an upcoming mixtape release, ‘Golden Dirt’ (released 19th November 2021, via Cosmic Glue), the track will feature as part of 40-minutes of brand new material from the band.

Featuring pulverising synth lines and clipped percussives, it’s a track that finds Hello Cosmos breaking from their traditional territory and exploring new worlds of sound that touch on hip-hop, electronica, spontaneous spoken-word expressionism and beyond.

With a beat-driven backing that lays a platform for the Hello Cosmos frontman to get up on his soapbox, “Hard Enough To Start With” is the sound of an artist truly at the end of his tether and cutting loose. Speaking about the track, Ben Robinson says of the track:

“About 2pm on the 5th monday of lockdown with the collapse of live music weighing down on me I went to make some music for escapism, but even that wasn’t helping. I put down a bass line I thought was rubbish, mumbled into the microphone and being totally uninspired ranted about how I was feeling. Absolutely expected to delete the file and never see it again but when we were putting Golden Dirt together it felt like part of the story and Olchemist worked his production skills on it.”

Following in the footsteps of recent singles “Loud Is Beautiful” and “From The Ground Up”, “Hard Enough To Start With” is the latest cut to emerge from the fascinating new mixtape project: ‘Golden Dirt’. Released on all platforms on 19th November, the mixtape is a new collaboration with San Francisco-based producer The Olchemist and sees the band pulling a something of a handbrake turn on the full-throttle psych/punk sound established on their 2021 debut ‘Dream Harder’.

Written as a means of expressing the frustration and boredom Robinson experienced as a musician and concert promoter (Bluedot/Kendal Calling) during the lockdowns of the last year, the frontman explains how the new ‘Golden Dirt’ mixtape came about:

“I found a little outlet back where I began, in a room by myself engaging with music on a very personal level, as an outlet, as a mental health crutch as a way of understanding what I was feeling, as a way of lifting myself out of depression, as a way of connecting with other people albeit still not in person. The result of those times is a series of recordings I’ve put together into a record called ‘Golden Dirt’”

Owing to a looser creative process, its loop based drum foundations (in the absence of the totemic live drum sound usually provided by his brother Simon) and the variety of guest vocalists who feature throughout; the music that emerged from the late-night ‘Golden Dirt’ sessions quickly adopted the feel of a mixtape. Adding spoken-word laced with his typically irreverent humour and archly warped social commentary, the off-the-cuff lyrics offer a visceral snapshot of Robinson’s mindset day-by-day.

“After doing a rough track I’d then use these to vent my thoughts and feeling.” reflects Robinson. “Sometimes I’d just say what was in my head to get it out such as on ‘Hard Enough To Start With’, other times I’d write a lyric in the day and mess about with it later. A lot of the tracks take on a different meaning looking back on them. As a result there is a narrative of my journey through the last year or so”

Sending the tracks to San Francisco for a West Coast touch, the recordings were then woven into their final mixtape form by The Olchemist (aka Oliver Linton Brown) who also worked on ‘Dream Harder’.

Hello Cosmos will release the ‘Golden Dirt’ mixtape on 19th November 2021. Standby for further announcements in the coming weeks… 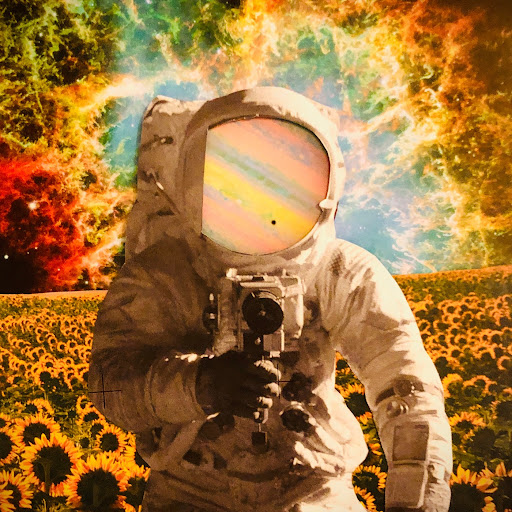