The Prettiest Curse out June 5th via Lucky Number

“The Prettiest Curse is an evolution. It is striking, complex, uncompromising indie-pop”  – Loud and Quiet

“While the Madrid band’s third album does have a new sheen of sophistication and ambition, it remains full of buoyant, ballooning pop songs and slumber-party attitude – Q

“The Prettiest Curse is their finest work to date” – The Skinny

The Madrid-based quartet snarl at the hilarious comments they’ve received over the years with lyrical wit on “Just Like Kids (Miau)”. Their sound, just like their response is untamed and fierce – a song that showcases the bands huge, uncompromised personality.  The 90s inspired, all bold and eye-popping video directed by Keane Shaw perfectly captures Ana, Carlotta, Ade and Amber’s fun energy no matter how hideous the remark. Watch here!

Miau is a cocktail of all the comments and “advice” we’ve had to listen to during all this years in the band.  From random strangers, “friends”, and  industry.  Oh wait…the guy sitting next to you in the bus probably has an opinion too!  If you wondered how does it feel to be a girl in a band, here you go.

With “The Prettiest Curse” Hinds shrug off any remaining lo-fi accusations and unveil a dizzyingly widescreen beast of an album, not so much a shift as a quantum leap in their evolution as a band. This is a record positively bursting with life, with the band finally harnessing the full extent of their pop prowess and unleashing songs which sound bigger, bolder, and more complex than anything they have done before. Which isn’t to say they have turned their backs on “being Hinds” – quite the opposite in fact! Here, they double down on what, precisely, makes them so special – the bright melodies betraying heart-breaking themes of isolation and betrayal, the empowering, don’t mess with us all-girl gang glow – while going even further. For the first time, they prominently sing in their native tongue, plus on the artwork they work with a childhood hero, the Spanish photographer Ouka Leele with magical results. You know how people say that a drop of balsamic vinegar makes strawberries taste more strawberry-ish? Well, On “The Prettiest Curse”, Hinds sound even more Hinds-ish, and the results are marvellous. 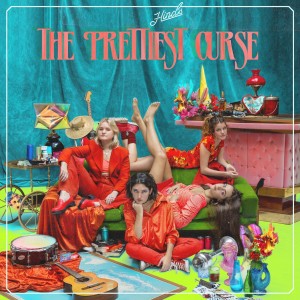