With their debut album ‘Double Rainbow’ arriving on 28th February 2020,

Sussex folk trio – IAN ROLAND & THE SUBTOWN SET today release the latest single to be taken from it: ‘Butterfly’.

As elegant in sound and fluttering in melody as the creature of its inspiration, ‘Butterfly’ finds the outfit spreading their wings with this intricate and soul-warming modern-folk composition.

Casting off the shadows of previous single ‘In The Darkness’, this latest release sees frontman and songwriter Ian Roland daydreaming of the wonders of Spring, while reminiscing on the fondest memories that decorated his own childhood.

Opening-up about the emotive lyrics of ‘Butterfly’, Roland says:

“‘Butterfly’ is a song about walks with my children when they were younger, around Kew Gardens and Wakehurst Place, a botanic garden housing Kew’s Millennium Seed Bank and it’s a song about my own childhood, climbing trees in Mayow Park, the oldest municipal park in the South London borough of Lewisham.”

The new single is accompanied by a fittingly beautiful video, filmed by videographer and friend of the band: Josh Lewis. Shot at the South Downs National Park near the band’s hometown of Brighton, the video finds the band performing on a hilltop against the park’s breathtaking landscape. While filmed on a chilly steel-grey day back in October 2019, the video introduces vibrant scenes of natural flora and fauna in bloom, permeating through the gloom with the promise of Spring just around the corner.

Though initially written in October 2018, ‘Butterfly’ was only finalised in its orchestration in the last year. With Roland supplying its trickling arpeggios and winsome vocals, it was left to violinist Simon Yapp and cellists Brione Jackson and Jade Woodhouse to add their lush, yawning string sections to the mix. With the finished version tested-out on audiences at the band’s shows around the country last year, the track has already gone down as an instant live favourite and was an instinctive choice for the Subtown Set’s next single.

Recorded at Subtown Studios in Brighton, ‘Butterfly’ was mastered by Alan Lowles at Airtight Studios, Manchester and engineered by Séadna McPhail.

‘Butterfly’ will be released in digital stores on 31st January 2020. It will also be featured on the band’s debut album ‘Double Rainbow’ – out 28 February 2020.

Ian Roland & The Subtown Set are also currently on a tour of the UK, catch the band at the following UK towns and venues:

Ian Roland & The Subtown Set are songwriter and guitarist, Ian Roland, joined by Simon Yapp, on violin and Jade Woodhouse, on cello. They are a #FolkPop #SoulFolk group with a nod to the classical and an embrace of three-part harmonies.

New album ‘Double Rainbow’ is made up of 11 tracks engineered by Séadna McPhail, mastered by Alan Lowles at Airtight Studios, Manchester. Initial recordings were made at Simon Yapp’s studio, Subtown Studios, in Brighton a fact that owes itself to origin of the band’s name: Ian Roland & The Subtown Set. Acclaimed producer Nigel Stonier (Thea Gilmore, The Waterboys, Joan Baez, Martha Wainwright, Fairport Convention) also offered his golden touch on a number of tracks set to feature on the release, following his commendable work on the band’s two previous EPs, ‘Day Became You’ (2017) and ‘The Valley’ (2018). Taking in sounds from soulful folk, to skiffle to rock’n’roll and folk-pop, the band’s keenly anticipated debut sees the band traverse a breadth of styles and genres with wide-eyed ambition. Underpinned by Ian’s eloquent and emotive lyricism, ‘Double Rainbow’ promises a beautiful and breathtaking release in waiting for the new year.

Since 2015, when Ian and Simon started performing live as a duo, they have played 300+ gigs in and around Brighton, Bristol, Cambridge, London, Sussex and Kent, supporting acts such as Martin Simpson, The Black Feathers, Stick In The Wheel, and TV Smith. In support of their upcoming debut album, Ian and band will be taking ‘Double Rainbow’ out of the studio and to live venues across the nation throughout 2020. 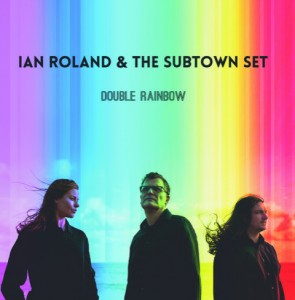 IAN ROLAND & THE SUBTOWN SET ARE: