Sealing the deal on a string of new songs that have materialised since their reunion last year, the original Into A Circle line-up of Paul “Bee” Hampshire and Barry Jepson will release their first collection of tracks for over 34 years.

In 2021, Bee and Barry began recording original songs that Into A Circle had performed live but never released. Finding their third mind awake during the process, a collection of new material slowly began to take shape in what will be the forthcoming: ‘Steel Box’. Featured songs include, “My Frozen Heart” (the first new song the duo wrote before recording new versions of tracks from their back catalogue shortly later), as well as other reinvigorated live classics “Drunk Stupid” and “Stitches”. Elsewhere, is “Spirit of Youth”, a track originally performed by Getting the Fear and written for Caresse P-Orridge. The new release also includes the personal and poignant featured single “Mercenaries”, a track originally penned in the ‘80s that reflects on Bee’s experiences growing up at a faith school, and details how those experiences ultimately influenced his rebellious later years. True to form, the collection will blend boundary pushing sounds with songs that ruminate on themes of literature, philosophy and religion that have always been prevalent throughout the band’s oeuvre.

With all songs written and performed by In2a0, its songs were recorded across Baz Studio, The Studio Barnsley and Inear Beat; with Barry also producing the record. Alongside Bee (vox) and Barry (Bass, Guitar, Keyboards, Programing), special contributions on the record come from Simon Hepton, Tuan Thailand and Billy Morrison who lend their expertise on Guitars, whilst guest backing vocals come from Gail Milner and Samantha Whates. Additional Strings, Saxophone and Loops were added by Mee, Manat Wanwong and Jym Daly respectively.

With advance pre-orders selling-out online in less than 24 hours, a digital version and standard cassette containing the ‘Steel Box’ tracks are also scheduled for release on 15 August 2022. The full tracklisting for ‘Steel Box’ is as follows: 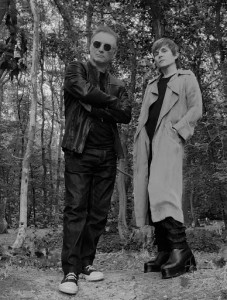 Into A Circle AKA In2a0 are Paul “Bee” Hampshire and Barry Jepson. Barry (formerly a member of Southern Death Cult - a band that featured vocalist Ian Astbury and later went on to become The Cult) was introduced to Bee in the legendary post/punk band Getting The Fear). Splitting-off from the group in December 1985, they together formed Into A Circle.

Catching the attention of the legendary Arcadia label early-on, Into A Circle issued their debut single “Rise” (featuring the bittersweet accompaniment of Rose McDowall of Strawberry Switchblade), which shot to a No. 5 position in the UK Indie Singles Chart. Signing to Abstract Records in July 1986, Into A Circle then released the Top 20 denting ‘Inside Out’ EP (which featured input from seasoned guitar maestro Billy Morrison), which would pave the way for their seminal debut album: ‘Assassins’.

Experimenting with a more electronic/dance oriented sound and with co-production by Larry Steinbachek of Bronski Beat, In2a0’s debut album would offer a suite of moreishly dark songs that touched on literature, theology, animism, sex, and spirituality. Featuring the fluid, funk-tinted Top 10 Indie Chart hit of “Forever” (ft. Rose McDowall) and the No.5 Indie Chart Hit “Evergreen” (with a video directed by Viv Albertine of The Slits), ‘Assassins’ would reach a peak of No.7 in the UK Indie Charts of Summer 1988 and become something of a cult classic in years to come.

Playing their last shows in 1989, a series of chance encounters would finally see Bee and Barry reconnect over three decades later. Discovering their potent creative chemistry still intact in 2022, Into A Circle have now begun hatching plans for what will be their first new material together since ‘Assassins’, as well as a clutch of live fixtures.

With a *special guest* appearance at Tomorrow’s Ghosts Festival 2022 already confirmed for 29th October, the band will also be playing a headline show at the Oslo in Hackney on 4 November. They will be joined on stage by one of their original guitarists, Simon Hepton. More details of other musicians will be announced nearer the date. The duo did reveal that once again, they will use visual projections, which were a central component of their live shows, to mirror the music. Into a Circle are thrilled that Nag, Nag, Nag and Specimen legend Johnny Slut will DJ for them at the show.

The band’s upcoming ‘Steel Box’ release will arrive this Summer, with the release intended to offer fans a taste of what to expect from Into A Circle’s headline London show this November. 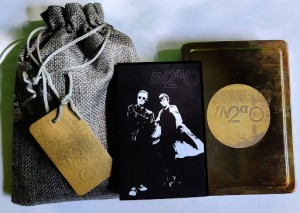