Ahead of her debut headline tour in early 2022, rising Hurworth-on-Tees soloist Jodie Nicholson has unveiled a spine tingling live session of her single ‘Second Sun’ – filmed by Jodie Canwell at The Old Church Studio, Northumberland.

Taking her cues from artists including Daughter, Warpaint, Lucy Rose, Bombay Bicycle Club, Pink Floyd and Laura Marling and her Dad’s love of prog rock, Nicholson subtly blurs the lines of genre expectations with warm soundscapes of indie, electro and folk-pop – with her ethereal vocals remaining constant over a diverse, explorative ground.

Nicholson’s songwriting explores what it means to feel alone in a familiar world, cradling vulnerability and loss with aching keys, pensive lyrics, mellow electronics and atmospherics from everyday, solitary moments.

In the intimate new session of ‘Second Sun’, Jodie reminds herself that sometimes you need to have faith in things getting better. “It’s one of those songs that’s shifted meaning as time’s gone by,” she tells, “though it began as a very personal, vulnerable thing, I think it resonates with a lot of people and serves as a big connector whenever I play it live. It’s good to be hopeful.

There’s always something really special to me about sharing vulnerable music in churches; big, wide open spaces where the sound travels for what feels like miles. The Old Church Studio is such a beautiful space and I’ve quietly been a fan of Jodie Canwell’s work ever since I first saw it. This felt like the perfect space and opportunity to create something beautiful together. I hope people love it as much as we do.” 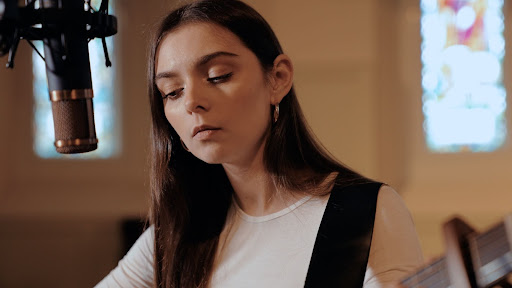 About Jodie Nicholson:
Awardee of the prestigious PRS Foundation ‘Women Make Music’ and Help Musicians ‘Do It Differently’ in 2020, Nicholson’s recent releases were produced remotely by Tim Bran, whose credits include such luminaries as London Grammar, Aurora and Birdy.

Her rich harmonies, deep textures and heartfelt lyrics have earned praise from key tastemaker outlets including American Songwriter, 1883 Magazine and Record Of The Day, in addition to a deserved place on the BBC Radio 6 Music playlist, Best of BBC Introducing 2020 on Radio 1 and Amazing Radio’s A-List, alongside spins across BBC Radio 1, BBC Radio 2 and BBC Introducing, solidifying Jodie’s status as one of the UK’s most exciting emerging artists.

Bouncing back to live shows in recent months, Jodie’s first run of festivals included a main stage performance at Wilderness, All Points East in London, Liverpool Sound City, Live at Leeds, Long Division and Twisterella, not to mention sold-out dates supporting The Howl & The Hum, Nathan Ball, The Futureheads and Benedict Cork.

February 2022 will see her take to the road for her first ever UK headline tour as part of Independent Venue Week, including dates in London, Manchester and Glasgow – culminating with an eagerly awaited debut show at The Cluny. See full dates below.