“It is arch and poised and a breath of fresh air – the verbal fluidity of The Arctic Monkeys riding on a Burt Bacharach magic carpet.” – Backseat Mafia

Having used their 2020 downtime to write, record and grow, Kent four-piece LITTLE SUSPICIONS release their first new music of the year, ‘Limes’.

Self-recorded between Kent, London and Italy, and mixed by Ben Etter (Deerhunter, The Big Moon), ‘Limes’ is the quartet’s second release since their formation in February 2020.

Combining the crooning vocals of Moritz Meyns with the band’s euphoric melodies and sweeping guitar lines, the band’s latest take on indie-rock makes for a modern day love song swimming in 60’s nostalgia; landing somewhere in the middle of Flyte and The Last Shadow Puppets.

“‘Limes’ follows the thoughts of the narrator’s nervousness while falling in love. It describes his experience of becoming hopelessly distracted when he thinks of his crushes’ green eyes, of which have become his Achilles heel.”

Whilst lockdown may have been a stalemate for many people last year, it gave Little Suspicions the time to write, record and grow. With infectious melodies and wrecking crew beats, the band quickly gained attention with their debut single “Wasting All My Time”; earning support from BBC Introducing, Amazing Radio, Gigslutz, Reyt Good Magazine and more. 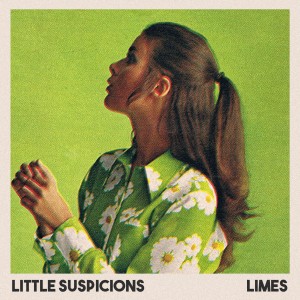 THE NEW SINGLE – OUT NOW