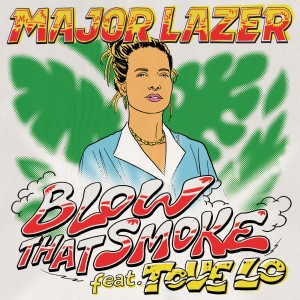 “From the beginning we pitched the project as a story of imagination, escape, inclusivity, music and mischief,” says DAD of the video. “The original concept came from Tove Lo and we brought it to life with both artists’ (super creative) teams. It’s really refreshing to work with artists that really care about stories and visuals and are willing to work hard to bring them to life. We were so impressed with Tove Lo’s commitment to the creative—dance rehearsals, multiple shooting days, going underwater for the shot—she and Major Lazer both brought a ton of passion to the project. We hope you enjoy our colorful escape through the closet.”

Combining sun-drenched West African guitars with the band’s trademark massive hooks, the track is a blissful slice of Afropop guaranteed to follow ‘Cold Water’, ‘Lean On’ and ‘Know No Better’ as the band’s next big anthem. Meanwhile, Tove Lo is one of the most prolific artists to emerge from Scandinavia in recent years, having accrued over a billion Spotify streams and featured on tracks for the likes of Charli XCX and Coldplay.

It’s been a whirlwind few years for the band that has seen them cover the likes of NME, The Guardian and Mixmag, headline major festivals across the country such as Lovebox, Bestival and the Other Stage at Glastonbury (where they played to over 75,000 eager fans) and release countless platinum singles.

Never keen to rest on their laurels, the band have grown have to become one of the world’s few truly global live acts. Truly embodying the spirit of global pop, the band have recently finished a tour of Africa, including dates in South Africa, Malawi, Kenya, Ethiopia and Uganda while also partnering with VETPAW (Veterans Empowered to Protect Africa Wildlife) to combat poaching in South Africa and beyond. With recent dates everywhere from Las Vegas to Haiti, we well as landmark, historic shows in Pakistan and Cuba (where the band played to over 400,000 fans), the band have continued to push boundaries in bringing the Major Lazer sound and mission – to make the world smaller by making the party bigger- across the world.

With a combined 7.6 billion Spotify streams and 5.4 billion YouTube views, Major Lazer are one of the biggest music acts on earth, with ‘Lean On’ breaking all streaming records in 2015 and still remaining the 6th most streamed song on Spotify of all time and the 13th most viewed music video on YouTube with over 2 billion views. Since their explosive debut album ‘Guns Don’t Kill People… Lazers Do’ in 2009, the band’s sound has evolved into a distinctive take on dancehall and EDM, earning them platinum awards and legions of fans across the world.