ANNOUNCES DEBUT ALBUM: ‘To Enjoy is the Only Thing’

The Melbourne-based Maple Glider, the project of Tori Zietsch (pronounced like ‘peach’ with a z), has detailed her debut album, To Enjoy is the Only Thing, due out on June 25th 2021 via Partisan Records (pre-order here). To coincide with the announcement, she has also shared her world-weary, hypnotizing, almost-love song, “Swimming,” accompanied by a skeletal (literally) music video. Listen / watch HERE. (Stream here).

On To Enjoy is the Only Thing, written whilst Zietsch lived in Brighton in the UK, she compiles a striking set of vignettes from her life; growing up in a restrictive religious household, falling in and out of love, cross-country and international travel, longing, alienation and more. Moments both unremarkable and life-altering, but always deeply felt, brought to vivid life by the beauty of Tori’s artistry and wry sense of dark humor.

Says Zietsch on “Swimming,” “This was meant to be a love song, but by the time I finished it, it kind of predetermined a break-up. I’d been experiencing some of the most beautiful places I’d ever been in, and falling out of love was very confusing. I was trying to force myself to be happy and in love, but I was far from home, and really lonely. It made sense to record the song after the break-up. I kind of felt like I was able to handle the sincerity of it then.”

Zietsch teamed up with creative collaborator Bridgette Winten for the “Swimming” music video (Winten also made captivating clips for prior singles “As Tradition” and “Good Thing”). Inspired by black and white horror films and their propensity to combine satire with the sincere, it follows Maple Glider with her new romantic partner-in-crime – an inanimate skeleton.

Following the dissolution of a previous musical project in early 2018, Zietsch left Melbourne and moved to the seaside town of Brighton. It was there she began to work on solo material, drawing from bouts of homesickness, basking in the lengthy European summer hours and writing non-stop. She returned to Melbourne late 2019 with a SoundCloud account full to capacity of demo uploads, enlisting Tom Iansek (Big Scary, #1 Dads, The Paper Kites, Hockey Dad) to produce and record the songs that would eventually form, To Enjoy is the Only Thing.

Elaborating further on her vision for the project, Zietsch describes: “This is what the album looks like to me: walking past tinsel covered trees in mid-September, swimming along the calanques in the south of France, car-bonnet frost, darkness at 4pm, lightness until 10pm, a muted feeling, the perpetual grey fog that swallows the Silver Coast, the colour red, this ugly green dress, red wine, red blood, red lips, red is the colour of the cardinal’s robe, Switzerland, my mother’s diaries, a coroner’s report, the sun on my face, the end of love…”

Previous singles from To Enjoy Is The Only Thing have garnered praise from The Line Of Best Fit, Dork, Beats Per Minute, The New Cue, For The Rabbits, NPR’s All Songs Considered, Apple Music 1’s Matt Wilkinson, Gorilla vs Bear, UPROXX, BrooklynVegan, Consequence, triple j Unearthed, FBi Radio, Apple, Spotify and more. 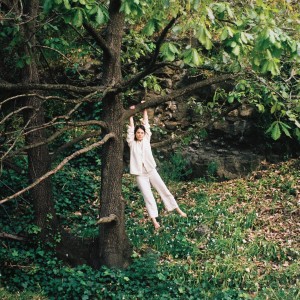 To Enjoy is the Only Thing by Mapler Glider is released on June 25th 2021 via Partisan Records.

View From This Side

Be Mean, It’s Kinder Than Crying