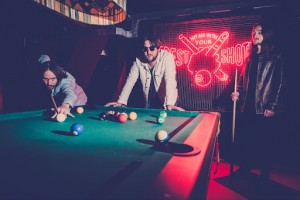 “What a groove… what a riff!” John Kennedy (Radio X)

The retro-tinted video arrives as the trio announce their signing to Fretsore Records for what will be their debut album, just a year after signing a deal for their self-titled debut EP (out now).

“We’re honoured and thrilled to have signed our first album deal with Fretsore Records. We’re so pumped to have our music played on the likes of Radio X, BBC 6 Music, Planet Rock and Absolute Radio that this next step felt like a no brainer. We’re playing the new tracks on the road so can’t wait to get them out into the world. Looking forward to working with Ian Sephton and the team on our first big album rollout..”

With recent release “When It’s Gone” serving as a thunderous testament to a band who are going places fast, the accompanying new video is a nod to the cavorting canon of ‘70s glam-rock influences that brought the track to life. Directed by Liverpool-based Dan Hewitson, who has previously worked for clients including BBC Match of the Day, Adidas, Liverpool Sound City and Record Store Day and directed music videos for the likes of Jamie Webster, Red Rum Club, SPINN, and Trudy & The Romance, the video sees the band deliver a playful live performance of the rugged and raucous track.

Evoking the allure of rock’n’roll of yesteryear, the new cinematic accompaniment to “When It’s Gone” is all sepia tones and fuzzy static shots — with a healthy dose of leopard print shirts, glitter-clad drums, fur-trimmed coats and long hair hammering to rip-roaring riffs. 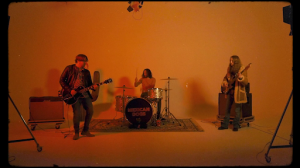 With an earth-splitting sound and uncompromising attitude, Mexican Dogs are Gaz Wilcox (ex-Bribes), Carl Rooney and Sonny Winder-Rodgers, and formed in Liverpool over the summer of 2021. Tapping into the seminal sounds of T-Rex or Led Zep and re-routing them via the high octane thrills of modern day titans like The Black Keys or Royal Blood, Mexican Dogs balance classic rock and contemporary on an exhilarating knife-edge. Fronted by Gaz Wilcox, the Dogs’ vocalist and axeman has been playing guitar of a fine pedigree since the age of 9. Cutting his teeth at live shows only a year later (including a Beatles charity show at the Empire Theatre), the singer has honed his talent at all of the finest live haunts in his native Liverpool and beyond, performing in a string of bands including Eutopia, The Verdict (who won the UK Battle of the Bands, played a gig in The Houses of Parliament and also played in New York with The Enemy and Reverend and the Makers), and later Bribes. Earning a formidable live rep with major gigs at the Liverpool O2 in support of Electric Six and at Sound City, Bribes earned multiple plays on BBC Introducing before going their separate ways due to creative differences.

Rekindling his passion for music following a year away, Wilcox formed Mexican Dogs upon meeting drummer Carl Rooney (who has toured with greats like Echo & The Bunnymen, Iggy Pop, The Hives, and also performed at Glastonbury) and young bassist Sonny Winder-Rodgers. Feeling enlivened by their “happy-go-lucky” vibe, skill and enthusiasm, the trio discovered an instant connection. Creating music quickly and with ease, they began hatching plans for the bold, noisy future together.

After signing to rising indie imprint Fretsore Records only six months after their formation, Mexican Dogs released their eponymous debut EP earlier this month. Creating a streaming storm with acclaimed debut release “You & I”, as well as killer follow-ups “Run, Run, Run,” and the raucous “She Cries Blues”, the band have amassed over 100k streams and 25k monthly listeners on Spotify, gained features in both Apple Music’s ‘New in Rock UK’ and YouTube’s ‘New Rock’ playlists, and received airplay from the likes of Radio X, BBC 6 Music and Planet Rock.

Celebrating the frenzied energy and electric charisma of a new band excited to unleash their sound to the world, Mexican Dogs will also be bringing their rip-roaring new material to the stage later this year. Coming in the wake of recent packed-out wall-to-wall gigs in Liverpool and London, full dates and details are as follows..

Mexican Dogs self-titled EP is out now, with physical copies on CD and vinyl available as a fan-first exclusive via Bandcamp.

“A homage to the glam heroes of yore, while still throwing in a bit of Stooges for good measure.” – VIVE LE ROCK

“Respectfully nods to Bolan and T Rex, with a good measure of grunged-up guitar riffs added to the mix.” – MUSIC REPUBLIC

“Wouldn’t sound out of place among the Smashing Pumpkins’ back catalogue, with that ’90s alt-rock feel!” – UBER ROCK

“Pushed forward by gritty riffs that feel like you’re being transported back to the golden age of rock’s past, this is a bouncy slice of retro sound.” – THE MOST RADICALIST

“An electrifying energy combining rock sounds of old and new, a new era of the genre is certainly upon us.” – ABOUT THE NOISE

“Driven by a firm beat and given flair by accomplished vocals and glam-rock guitar mastery.” – THE SONGBIRD

“Frontman and lead guitarist Gary Wilcox star continues to burn bright. His guitars have the prowess of The Black keys and the rock ‘n’ roll desperation of Soundtrack of Our Lives in the early stages.” – TRAVELLERS TUNES