Teasing the release, the band have revealed a brand new cut from the record: “Imelda“. Inspired by the extraordinary story of Filipino politician: Imelda Marcos; the track immortalises a very different kind of femme fatale in music…

A twisting tale that beggars belief, Imelda’s story is one of corruption, subterfuge and extravagance; a beauty pageant queen turned political mastermind and tyrant. An unscrupulous politician, Marcos is committed to the Guinness Book of World Records for the Greatest Robbery of a Government. And despite a notoriously lavish and illegally-funded lifestyle, Marcos sustained a lifelong career in government. Eventually caught-out on corruption charges just two years ago, Marcos is alive to this day (aged 91) and remains a divisive public figure.

Searching for morals in a story heinously lacking them, Micko Westmoreland says of the track:

“In the current climate of US politics, Imelda Marcos was ahead of her time. I found her to be highly manipulative, deceptive & prepared to go to any length to succeed in her endeavors, however far fetched they may seem. Imelda Marcos demonstrates that power, money, fame & influence are not the prerequisites to greater happiness.”

A longstanding favorite in the Mellotronics live set, “Imelda” is a thrillride of pinpoint polito-punk; three-and-a-half minutes of Buzzcocks-meets-XTC fun and fury. Fripp-esque guitar flourishes come courtesy of full-time Mellotronics axeman: Jon Klein; whereas guest vocalist Keiko Yamazaki also raises the pitch, and the lunacy with a remarkable appearance on the chorus. 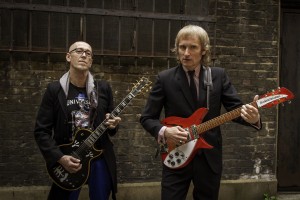 “Imelda” is one of 10 tracks to be found on ‘½ dove – ½ pigeon’, the long-awaited debut album from Micko & the Mellotronics, out 27 November 2020 via Landline Records.  “I titled the record ‘½ Dove – ½ Pigeon’ because I thought it was an honest reflection on how most people see themselves…” muses Micko, setting stage for a record of a very different breed…

Fronted by Micko Westmoreland; a musician, actor and creative already well known for his solo releases under his own name and material as The Bowling Green; ‘½ dove – ½ pigeon’ sees him joined by his impressive backing band: The Mellotronics. Forming in 2017, the Mellotronics initially began playing out as a three-piece with founding member Nick Mackay (drums) and the enigmatic addition of Vicky Carroll (band “wicket keeper” and bass player) in the wings. In 2018, the band were joined by revolutionary guitarist Jon Klein (Siouxsie & the Banshees/Specimen, and founder of the iconic Batcave club) who also adds his flare to their upcoming debut.

From the observational to the personal, the ‘½ dove – ½ pigeon’ sees Westmoreland put the world’s peculiarities and his own fascinations under the microscope. From blowing apart the petty and mundane in life with rollicking ripostes (“Noisy Neighbours”) to reflections on the passing of time (“You Killed My Father”), life imitating art in New York City (“Halcyon Days”) and philosophical fantasies about the works of eminent psychologists (“The Fear”); a kaleidoscopic gamut of topics are covered in a record packed with references to pop-culture, philosophy, history and much more. Over the years, Westmoreland has built up an array of TV & film connections; most notably with a starring-role in the cult 90s movie ‘Velvet Goldmine’, but also composing soundtracks with acclaimed sibling Wash Westmoreland (‘Still Alice’, ‘Colette’). Naturally, Westmoreland’s love of drama intrinsically spills into the record too.

An album of slick new wave and razor-edged rock’n’roll, packed with even sharper quips and bone-dry witticisms; ‘½ dove – ½ pigeon’ invites you to revel in the obtuse and celebrate pop’s avant garde with a novel and inclusive sense of fun.

Micko & The Mellotronics release ‘½ dove – ½ pigeon’ into the wild on 27 November 2020, available via Landline Records: http://landlinerecords.com and distributed by Republic of Music

Or for any requests including interviews and advance album copies, please contact:
thom@sonicpr.co.uk