NECK OF THE WOODS

A one day festival hosting a line-up filled with the best and brightest alternative sounds around, the event at Earlham Park, Norwich is pleased to announce even more names to its bill.

Sizing up a tasty mid-afternoon slot, THE SNUTS will be tearing up the Main Stagewith a set of their arch alternative-rock. Becoming the first Scottish band to earn a No.1 position in the UK’s Official Albums Chart with their seismic debut last year, the West Lothian four-piece will be offering a tantalising opportunity to hear new music from the much-anticipated follow-up to ‘W.L.’. 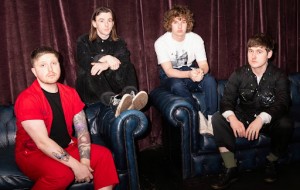 Also on the Main Stage, Sony signed star-in-the-making CAT BURNS will be introducing the crowds to her soulful sound, with a set infused with gospel influences, pop inspirations and her love of guitar and indie-led music.

PLUS, getting the festival off with a bang, local legends and “indie-rock social hand grenades” YOUTH KILLED IT will be launching the first-ever Neck of the Woods with an unmissable opening-set.

Over on the Second Stage, attendees will now have the opportunity to catch Irish indie-rock frontrunners THE ACADEMIC as they bring the songs of 2021’s acclaimed ‘Community Spirit’ EP and favourites from their Irish No.1 charting debut to the festival.

While plumping up the Stage 3 billing, long established indie pin-ups LITTLE COMETS, plus fast-ascending West London songwriter MATILDA MANN are new additions you won’t want to miss a second of.

A one day festival of incredible live music across three stages, the inaugural Neck of the Woods will be popping up in Earlham Park, Norwich on Sunday 29th May 2022.

Promising a line up filled with the finest indie and alternative sounds around, new additions: THE SNUTS, CAT BURNS, THE ACADEMIC, LITTLE COMETS,MATILDA MANN, and YOUTH KILLED IT, will be joining a stellar line up of previously announced names including a headline set by THE KOOKS, plus appearances from DMA’S, SEA GIRLS, dodie, THE LOTTERY WINNERS, YONAKA, KAWALA, THE GOA EXPRESS, THE ROYSTON CLUB, BETH McCARTHY, STONE, DECO, RATS and more.

In addition to the music, boutique street food stands and bars across the site will be catering to all needs from day till dusk.

Standby for further news and updates as the debut Neck of The Woods prepares for take-off.

Tickets are priced at £45 (+Booking Fee) and on sale now!