RELEASE NEW SINGLE FOR 2020: ‘HOME IS WHERE THE HEART IS’

(OUT TODAY – ON MODERN SKY UK)

Paris Youth Foundation announce rip-roaring new single Home Is Where The Heart Is, alongside their first ever UK headline tour.

From the off the relentlessly bright instrumental evokes images of a late night drive down memory lane, where the fading auburn light of the sun battles with the gleam of overhead streetlamps. The guitar and backing vocals exchange rotations of a buoyant riff as the bass and drums lend a sense of propulsion that persists throughout. The sheer vibrancy of the track will shake the music world from the slumber and ruins of the post-Christmas musical landscape.

Frontman and songsmith Kevin Potter’s vocal delivery is earnest, and sits perfectly at the confluence of the sanguine soundtrack and poignant lyricism, serving the surface level indie rock scorcher whilst subtly reinforcing the theme of nostalgia-driven heartbreak. According to Kevin:

“Home Is Where The Heart Is is very much a love song at its core. It’s about that rare time in breakup, where you kind of don’t want to be sad or argue anymore. You just want to appreciate the time and the memories for what they were. It’s about that person being home for the weekend and how a place and a person can take you back in time, and maybe just for one night you pretend you’re still the same kids who fell in love all that time ago.”

It’s a flawless start from a band who are set to have an incredible year. With rumours of an album on the way in the summer, there is no doubt that Home Is Where The Heart Is will not be the last we hear from Paris Youth Foundation, and their sound is one set to adorn festival stages throughout 2020. The release of Home Is Where The Heart Is precedes a seven-date headline tour in February.

Following their debut show on the BBC Introducing Stage at Reading Festival which caught the attention of BBC Radio 1’s Huw Stephens, who has supported the band ever since, Paris Youth Foundation have gone on to play major new music festivals including Hit The North, Live At Leeds, The Great Escape and Liverpool Sound City. They’ve also toured and played alongside Blaenavon, The Magic Gang, Vistas, The Sherlocks, The Xcerts and The Night Café.

With previous singles receiving Radio 1 play, Radio X evening playlist and Spotify’s New Music Friday, Home Is Where The Heart Is will only strengthen their position as one of the buzziest bands around. 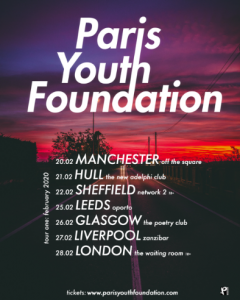