RAISE THEIR GAME WITH BRAND NEW SINGLE:
“GET ON THE ROOF”
LISTEN HERE || WATCH THE VIDEO HERE
OUT NOW 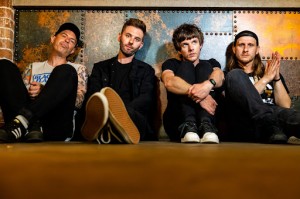 Confirmed for release on 9 September 2022 (via Xtra Mile Recordings), the record promises to be everything it says on the tin and arrives as the rapid follow-up record to last year’s acclaimed debut effort ‘Fractured Party Music’.

‘Primetime Entertainment’ is preceded by its first official single, out now, “Get On The Roof”, is a dazzling, multi-faceted weapon of a track that unfolds its complexity of features like a punk-rock swiss-army knife. Corkscrewing through a barrage of pumped-up power-chords, sidewinding solos, and blitzkrieg key-changes, Johnny Marriott leads the charge in a track packed with uproarious vocal chants guaranteed to raise any roof.

“Let’s get on the roof and listen to something cinematic, let’s ignore the truth like none of this is problematic!” goads Johnny, tongue firmly in cheek.

Echoing the band’s DIY ethos and ardent sense of humour, the new tune also arrives with an official video which offers a unique spin on that old adage that ‘if you build it, they will come’… Watch it here.

New single “Get On The Roof” lets off a flare-like signal that in 2022, PET NEEDS are poised and ready to take on the world as it lights the way to latest album ‘Primetime Entertainment’. Written and recorded in the 11 months after signing with Xtra Mile, the band’s latest record is a discernibly more personal effort than its party-primed predecessor. Dealing with feelings of fear, fatigue, adrenaline, failing and determination, the writing of the record unwittingly proved to be a journey of profound psychological discovery for its frontman. As Johnny says:

“This is a much deeper, personal album. It talks about me being quite self-destructive and recognising where I need to get better in myself. I thought I was writing a record that was about partying and I didn’t realise until we sat down and listened to the album from start to finish.”

Described by Johnny as “our ‘London Calling’”, it’s a record flowing with sensation, unexpected textures and features their quietest and noisiest songs so far. It also revels in the maturity of self-analysis. Tracks like ‘Lost Again’ and ‘Ibiza in Winter’ tackle Johnny’s attempts to remain creative, positive and to look after himself. Elsewhere, ‘Spirals’ – perhaps their heaviest song so far – spares nothing as he screams: “I can’t handle myself, I can’t manage this band”. And then, ‘Tried and Failed’ and ‘Fear for the Whole Damn World’ are almost self-explanatory.

As with their debut, the record features Johnny and his brother George Marriott (guitar), plus rhythm duties from Rich Gutierrez (bass) and Jack Lock (drums). Like ‘Fractured Party Music’, the new album has also been produced by friend and mentor Frank Turner. Speaking about the recording process and their special relationship, Johnny says:

“The thing that connects all of us is passion for creativity, taking risks and being ambitious together… We’ve all taken a massive risk to do this, and every emotion is intensified – understanding each other, that we’re all flawed – and that’s fine! – you’ve got to love the music and love each other to survive.”

Already road-testing the record in readiness for its Autumn release, PET NEEDS are currently on a huge US tour supporting on Frank Turner’s ‘50 States in 50 Days tour’, having just completed two European tours, one with Frank and the other with Skinny Lister. While UK fans may have to wait a little longer for a full headline tour, PET NEEDS will be playing a special one-off headline show in Colchester Arts Centre on 16th December. Speaking about the show, Johnny says:

“We’re headlining a 400-capacity venue in our hometown Colchester at Christmas. I moved here 7-8 years ago now. For local bands, if you play Colchester Arts Centre, you’ve got credibility. I never thought we’d headline that venue and If we can sell it out, that’d be incredible.”

Before that though PET NEEDS are also confirmed to be supporting Frank Turner at his Autumn UK fixtures. Full dates and details are outlined as below: