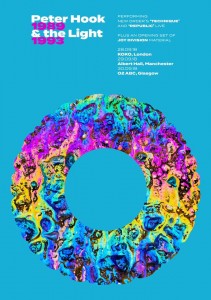 An Evening With Peter Hook & The Light

With An Opening Set Of Joy Division Material

Tickets on sale Friday 9th February 2018 at 10AM via See Tickets here – bit.ly/TheLightTechniqueRepublicAlbertHallMCRTickets

Having toured the albums from Hooky’s previous bands for almost eight years now, Peter Hook & The Light have now arrived at the next chapter in their journey as they reach the late Eighties and early Nineties albums of New Order, “Technique” and “Republic” which they will perform at Manchester’s Albert Hall Saturday 29th September 2018.

The Light have just completed a widely acclaimed world tour performing both “Substance” albums of Joy Division and New Order across North and South America. Europe, Australia and New Zealand but these “Technique” and “Republic” concerts mark the band moving forward through the catalogue once more.

As has become their custom, all dates feature The Light performing an opening set of Joy Division material.

Tickets for the concert go on sale Friday 9th February at 10AM via See Tickets here – bit.ly/TheLightTechniqueRepublicAlbertHallMCRTickets

“Technique”, New Order’s fifth studio album chronicles the impact of acid house on the band, marking the clearest statement of the rock and dance influences which were shaping their output. Released in January 1989, just after the bands infamous G-Mex gig and aftershow downstairs at The Hacienda in December the previous year, it became New Order’s first album to go to number one in the UK. It was also hugely successful in the United States where the influence of  Quincy Jones’ Qwest label regularly got the band’s singles to the top of the American dance charts,

“Technique” was driven by the classic acid house single “Fine Time” which rivals “Blue Monday” as probably the most openly dance orientated record the group ever produced whilst other tracks on the LP “Round And Round”, “Mr Disco” and “Vanishing Point” also reflect the dance sensibilities then fusing their way into New Order’s sound. Yet like on its predecessor, “Brotherhood”, these are balanced by the vocal led, more rock leaning “All The Way”, “Gulity Partner” and “Run”.

Legendarily recorded in Ibiza in 1988, Technique has often been observed to capture the sound of that summer and the heady period back them both on the island and in the UK and of course, Manchester. As is widely known, the band didn’t actually do much work in Ibiza, a jaunt that Factory label boss Tony Wilson once told Peter Hook “was the most expensive fucking holiday you’ve ever been on”.

The band returned to the UK to finish the LP at Bath’s Real World Studios later in 1988, itself the scene of another legendary New Order party when recording was completed.

In many ways, “Technique” epitomised its time and the culture surrounding it. It came out to generally ecstatic reviews from the top notch echelons of the music press. In the UK, Melody Maker called it “a rare and ravishing triumph” whilst NME proclaimed the band “had fashioned an LP of rare and unflinching honesty“. Across in the States, SPIN called it New Order’s best ever album, Rolling Stone referred to its “sonic presence with immaculate playing” and Pitchfork sum up the album simply as “magnificent.”

“Placed in the perfect position to deliver the definitive alternative take on house music, the band produced another classic record”. All Music

Many consider “Technique” to mark the high point of New Order and as they went on from the album to headline Reading Festival in August 1989, before going on hiatus and also pursuing their solo projects, this is generally thought of as the golden period for the band.

Due to the well documented history surrounding “Republic”, it is remarkably difficult to characterise it as sharing the same sunny outlook as “Technique” but Hooky’s decision to include it in these concerts underline his commitment to perform all of his catalogue that he has committed to record.

Not that “Republic” wasn’t hugely successful. Again it went to number one in the UK and became the band’s biggest ever selling album in America, narrowly missing the Billboard album chart top ten peaking at number 11.

However it is not unknown that it was New Order’s most difficult album to make. Factory Records had hit financial trouble and needed a New Order album to bail themselves out so the band were coerced into recording the album in to save Factory. Something that didn’t entirely work out as Factory was then to go bankrupt in November 1992 and New Order then signed to London Records, an offshoot of Warner Bros with “Republic” released in May 1993.

The band roared back with first single “Regret”, still thought of as one of their finest ever, and subsequent singles “Ruined In A Day” and “World” did well, both in their original versions and as remixes which again dominated the dance charts.

Yet it’s not hard to deduce that the demise of Factory, coupled with the ongoing difficulties surrounding the band’s involvement in Manchester’s Hacienda as well as internal friction within New Order and due to the band members’ solo projects, all had an impact on the recording sessions and mood that lies behind “Republic, something that Stephen Hague did his utmost to assuage in producing the LP.

Still considered a worthwhile addition by fans to New Order’s catalogue, yet, if not perhaps hitting the standards they had previously set for themselves, “Republic” did receive some strong reviews. NME’s Dele Fadele awarded it 8/10 on release whilst All Music commented that “Republic simply borrows elements of contemporary innovations in club music to frame a set of effortlessly enjoyable alternative pop songs.”

For videos and concert footage from The Light check -www.youtube.com/peterhookandthelight

On Peter Hook And The Light Live

“In the two-and-a-half hours Peter Hook & The Light were on stage, it was hard to fathom how many hits New Order and Joy Division had. Just within the first hour, there were enough songs that some artists today wish they could both write and have in their arsenal. That is what great chemistry in a band does.” Huffington Post

“Hooky has done this. His tours are for the fans, and his fans flock to him. Every person standing in the Tivoli has been affected somehow by one of his bands, and have now witnessed what is a greatest hits of both. As they finish the final song, we applaud the man who had a hand in changing our lives in one way or another.” Society Of Sound

“This reviewer could easily write about every song played – the show went for almost three hours - as they’re all classics. To hear back to back greatest hits live of two of your favourite bands just never happens. Many went home tonight with a big grin on their faces.” The Music

“Three sets and no support – no-one can accuse Hooky of short-changing the fans or not putting on a totally professional show. ” Doubtful Sounds

“A brilliant night, a celebration of the music of Joy Division and New Order. That is Hooky’s mission and this was easily mission accomplished.”  Everything Flows

‘A masterclass in euphoria and heartache in equal measure…. The chronology of the set played perfectly as high spirits continued to grow right up until the end of the show.” Gigwise

“It was certainly one of those special shows were the venue, artist, and fans all clicked perfectly to make for a very memorable experience and a blazing hot and awesome show by a legendary artist and performer, who in my opinion is the heart and soul of New Order keeping the most authentic live performance of their music alive for old and new fans.” Rock Subculture

“By focusing solely on the music, and allowing the songs inherent structure to do the heavy lifting instead of blowing them up into pseudo-stadium cuts, their inherent virtues were that much more apparent. Frankly, these songs rock…..This is Peter Hook and his band taking a chance, dusting off wrongly ignored tunes, and kicking ass. “Punk News