Rising star Ryan McMullan has announced a show at Arts Club Loft in Liverpool this September.

The show comes alongside the release of Ryan’s new single “Real Love” (out 20 May) and the announcement of his forthcoming debut album ‘Redesign,’ due 26 August 2022.

Part of a huge world tour in support of the new album, Ryan says:

“I can’t wait to play ‘Redesign,’ in front of audiences all over, from Derry to Dublin, New York to Berlin. I couldn’t be happier to be releasing music and playing shows.”

The second single from his forthcoming album, “Real Love” sees the Portaferry-native duet with Beoga singer and co-writer Niamh Dunne on this wonderful song which starts out with a ballad feel before building to a propulsive chorus. Lyrically, “Real Love” explores the end of a relationship: ‘when you know you know.”

“Written with the talented people of Beoga, “Real Love” is about knowing it’s over, but not being ready to leave. It was the first of two songs written with members of Beoga that made it on the record. Recorded in Bannview Studios, Portglenone, it also features the incredible vocals of all-round wonderful human that is Niamh Dunne. As we wrote the song, we liked the idea of exploring it as a possible duet, and after one listen I knew Niamh’s vocal needed to be on this song. It was a joy to create, and a lot of fun to sing.”

Arriving later this summer, the process of recording ‘Redesign,’ was shown in the documentary “Debut”, which was directed by award-winning filmmaker Brendan J. Byrne and shown last year at Galway Film Fleadh and on the BBC. The film centres around a four-day recording and listening session in Cruit Island, County Donegal at the end of 2019, where Ryan and his team assessed all the songs competing for a place in the album. Threaded through this is the story of Ryan’s nascent career and journey to stardom. As Ryan says:

“I’m so excited to finally announce the release date of my debut album. After what has felt like a decade of promises, it finally gets its time and I’m very happy that we’ve got here at last. It was recorded all over the world, but its mainstay was Bannview Studios in Portglenone, with producer extraordinaire Seán óg Graham.”

With the live show in Liverpool part of a broader run of live dates, expect more news from Ryan McMullan incoming soon. 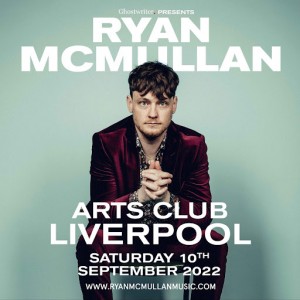