THE LATEST INSTALMENT OF THE CINEMATIC NEW ALBUM + FILM:
WEATHER THE STORM
OUT 4 OCTOBER 2019, VIA SKINNY DOG RECORDS

“It’s a really remarkable, beautiful record …there’s something so refreshingly authentic about this, it’s really from the heart, and her [Petra Jean Phillipson] voice is extraordinary.” Guy Garvey (Elbow) BBC6 Music 1.9.19.

SKYLARK & THE SCORPION have revealed a captivating new instalment of their Weather The Storm project: ‘Come Forward And Say’.

Set for release on Skinny Dog Records on 4th October 2019, Weather The Storm is both a record of majestic folk beauty and a breathtaking cinematic experience from the recording/writing partnership of Nick J Webb (The Lea Shores / Nadine Shah) and vocalist Petra Jean Phillipson (David Holmes/Martina Topley Bird/Marianne Faithful).

The duo who have been revealing chapters of the 40-minute film and soundtrack album sequentially in the run up to its full release this Autumn have now unveiled ‘Come Forward And Say’. Featuring the orchestral arrangements of Nell Catchpole and layered with Petra’s inimitable siren song adding heartbreaking depths of sorrow, ‘Come Forward And Say’ is a spellbinding new track that returns us to the world of Skylark & The Scorpion.

As with the rest of the film, the video for ‘Come Forward And Say’ was recorded off the coast of Scotland in the middle of Winter; with the band, cast and crew battling against the harsh terrain and bitter elements in pursuit of this stunning visual accompaniment to the album. Directed by the esteemed Finlay Mackay and starring Nick and Petra in the roles of doomed lovers the Skylark & The Scorpion, this latest scene takes places at a frozen lake near the Eashaness Lighthouse of Shetland.

“Today we release the ‘frozen lake’ scene soundtracked by the song COME FORWARD AND SAY.” says Nick. “It’s the only scene in which we both wear white, and when you watch the film in its entirety, the reason for this should come clear! It really was a beautiful location and the light was stunning.”

Skylark & The Scorpion conceptually follows the journey of two star-crossed lovers, romantically entwined but perhaps destined never to be together. Beginning with atmospheric opening salvos ‘Weather The Storm’ and ‘Hey Lover’, the duo have been unwinding the chapters of this epic story through successive videos, each soundtracked by a song to be featured on their upcoming album. Follow the full story here: https://vimeo.com/weatherthestorm

Launching the full film and album on 4th October 2019, Skylark & The Scorpion have also announced details of a special one-off show at the St Matthias Church in Dalston the same night. Performing with an 8 piece orchestrated band, Nick and Petra will be playing the entire album in soundtrack to the film as it is projected simultaneously on a cinema-sized screen behind them. Support comes from Alexander Carson. 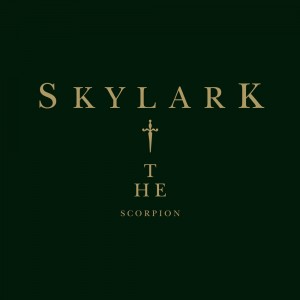 ‘Weather The Storm’ by Skylark & The Scorpion will be released on 4th October 2019 on Skinny Dog Records.

Weather The Storm is the debut album by Skylark & The Scorpion; an ambitious musical odyssey that tells the tale of two haunted souls on their search for re-connection. A conceptual project formed around the pairing of creator, producer and songwriter Nick J Webb (The Scorpion), and vocalist Petra Jean Phillipson (The Skylark), the album finds the duo assume the roles of two ill-fated lovers as they traverse through a turbulent story arc told through the album’s captivating song cycle. A true labour of love and a long time in the making, the Skylark & The Scorpion record arrives at the end of a journey almost as epic in reality as it is in its fiction.

The origins of the Skylark & The Scorpion can be traced back several years ago to the shadows of Webb’s previous band The Lea Shores. Originally written as a collection of sonnets penned while he was experiencing difficulties in his personal life, Nick channelled the conflicting emotions of love and loss, passion and heartache he was feeling at the time into the raw and heart-felt lyrics at the very essence of ‘Weather The Storm’. As Nick wrestled with his demons during the recording of The Lea Shores’ self-titled debut album, it would be his introduction to Petra (who provided her euphonious vocals on the band’s track ‘Open Valve’) that would provide the initial spark to that would ignite their future as Skylark & The Scorpion together.

Collaborating from thereon with impromptu sessions at Nick’s childhood home in Suffolk, to a church attic in a nearby village, and even an office above a tyre garage in South East London; using a laptop and a borrowed microphone the pair began to lay down the demos of what would become Weather The Storm.

Over the ensuing years, the pair began to flesh out these musical skeletons with the assistance of a talented array of hand-picked musicians and friends. Contributions from ambient music composer Roger Eno (brother of Brian, who added piano and accordion to the mix) and orchestral arranger Nell Catchpole (on violin/viola), with additional contributions from Tim Harries (double bass), Jamie Spencer Smith (guitars), Fontane Liang (harp) and Nick Foot (percussion) saw the album begin to blossom into the elegant finished article we hear today. Webb, who also plays the cornet, then completed the album by adding brass arrangements, before sending the results to celebrated producer Ben Hillier for mixing (who had also produced The Lea Shores debut).

Finally releasing the results as Weather The Storm in 2019, this meticulously crafted album is a feat nothing short of remarkable. From the haunting haze of strings to the melodiously plucked harp, then the ethereal female voice that soars like a siren call, beseeching a lover to stay, Skylark & The Scorpion simultaneously tug at the heartstrings and nourish the soul. Their sweeping soundscapes swell, soothe and seduce like the titular lovers. Destined to be together forever, but fated to be separated ‘til eternity, their tale of doomed romance is the stuff of classical tragedy: the Scorpion watching helplessly as passion disintegrates around him; the Skylark seeking to save him before he slips away…

PRAISE FOR WEATHER THE STORM (FILM)

“In an age where the art of the album and attention spans are compromised, this film forces us to listen from start to finish. It is a total thing of beauty” – NADINE SHAH

“From the conception of this simple idea, through capture and edit, this is a quiet masterpiece. It’s what you would wish for in the best modern opera or ballet. It leaves just enough space for you to create your own personal story whilst carrying you with a perfect blend of music and cinematography to another more poetic world” - HENRY NORMAL