It has been a decade since Smoke Fairies entered a recording studio to record their debut single ‘Living with Ghosts’, since then school friends Jessica Davies and Katherine Blamire have carved out an incredible body of work.

Having self-released several early singles the band were first introduced to a worldwide audience with their 7” ‘Gastown/River Song’ released as a Third Man Records Blue Series, which Jack White produced and played drums on. The band has toured the world with the likes of White himself, Laura Marling, Bryan Ferry, Seasick Steve, The Dead Weather, Richard Hawley, Dawes, Blitzen Trapper and Public Service Broadcasting after collaborating on the single ‘Valentina’.

Their debut album proper ‘Through Low Light and Trees’ received rave reviews, MOJO giving it four stars and describing the record as “heartfelt and sensual… poised and elegant”. The album went on to be named one of American Songwriter’s Top 50 albums of 2011.

On the band’s follow-up release ‘Blood Speaks’ Pitchfork commented that Blamire and Davies “…don’t trade vocal duties so much as appear to sing from the same body, their voices nearly indistinguishable, shifting between smoky moans and toe-curling trills,” their eponymously titled third album was released in 2014 of which For Folks Sake said “Smoke Fairies are attempting to creatively push themselves into and beyond the ether.” ‘Wild Winter’, the seasonal album, followed in 2015. Rough Trade’s record of the month, Clash noted it was less a Christmas record and more “mid-winter-noir”.

In February 2020 the band released what many commentators believe to be their greatest work to date. ‘Darkness Brings The Wonders Home’ was recorded in Seattle with producer Phil Ek and saw the band reach the top ten UK Indie Charts, bag a number one in the UK Rock Chart and then with their last single ‘Elevator’, a 7” picture-disc, reach number one in both the UK Indie and Physical Singles Charts. The album went on to be described as a “masterpiece” by The Metro newspaper in London and then on the back of their most successful UK tour to date the UK went into lockdown prompting Smoke Fairies to stage two very successful streaming events, the second of which was to celebrate the tenth anniversary of ‘Through Low Light and Trees’.

Jessica and Katherine are back in the studio now working on their 6th studio album and are soon to release their first ever ‘Singles’ compilation.

In 2022, Smoke Fairies will be hitting the road for a string of UK dates throughout February.
Full dates and details are as follows:

Interview time with the band, and guestlist are available upon request. 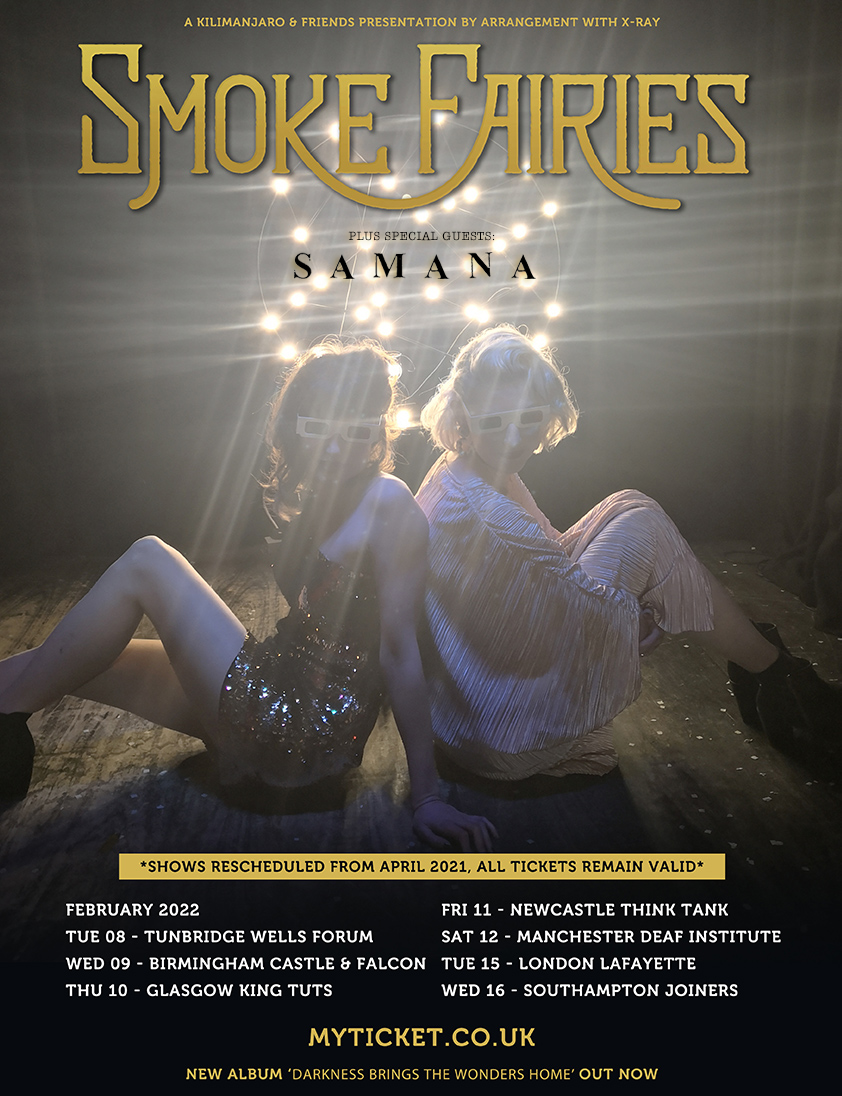