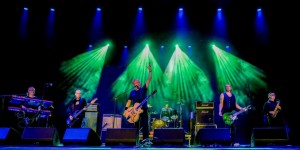 “Spear of Destiny are criminally underrated and are one of Britain’s best, Boys Own, punch the air, grandiose Rock ‘n’ Roll bands.” - Louder Than War

“Kirk Brandon is one of the Uk’s best kept secrets.” - MOJO

“@kirkbrandon is one of our greatest musical geniuses.” - Jeremy Vine

“Thirty years together makes for flawless musicianship, a unique sound, and some remarkable riffs and harmonies.” - Aberdeen Voice

SPEAR OF DESTINY have announced a run of UK live dates for Summer 2022, kicking off in Hertfordshire on 2 July.

Hard to believe, but Kirk Brandon has been leading Spear of Destiny for over 39 years. Formed in 1983 after the demise of Brandon’s iconic post-punk band Theatre of Hate, Spear’s current line-up is the longest serving to date.

Featuring Adrian Portas (New Model Army / Sex Gang Children), Craig Adams (Sisters of Mercy / The Cult / The Mission) and Phil Martini (Jim Jones and the Righteous Mind), the line-up was bolstered by the addition of saxophonist Clive Osborne in 2019.

In 2018, Spear of Destiny released their fourteenth studio album ‘Tontine’ — fully funded from a private fan presale. Just before the 2020 lockdown, the band went into the studio and re-recorded perhaps their best known album, 1985’s ‘World Service’, with the record released to much critical acclaim in November 2020.

The upcoming UK tour will feature the album and B-sides in full, and the show will be finished off with a career-spanning extended encore. Full dates and details as follows: 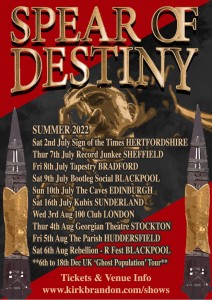