This December, TANKUS THE HENGE invite you to: ‘Luna Park!’.

Join the visionary rock’n’roll storytellers as they open the gates to a utopian new world with their third studio album. A place without prejudice, Luna Park! is populated by the weirdest and most wonderful people, there to help you forget reality and open your mind to new ways of thinking. Among them is: “Fayaway”, a storming new track that has clocked-up over 16,000 streams already

“Fayaway” is based on the semi-fictional character in Typee, a nautical adventure novel by Herman Melville in 1846 (who went on to write Moby Dick). An inhabitant of the island the protagonist lands on, he can’t help but fall under her spell in the strange new land he finds himself in.

“We thought she had a very mystical power over him” says Tankus frontman Jaz Delorean, “in reality, Melville never forgot about her and pined for her until the day he died.”

Finding asylum in ‘Luna Park!’ all these years later, Fayaway is one of countless things to fall in love with on Tankus the Henge’s upcoming album.

Homing in on an array of colourful characters including “Susie Sidewinder, “Sundance Kid”, and “Pilgrim”, the record follows their journeys as they each turn their backs on a city they once loved, now polluted by “glitterlung”, and make the journey to the utopian Luna Park! in search of a better life.

It’s not a concept album as such, more a vision. A fantasy of a new world where creativity is celebrated and live music thrives. A place where venue closures are a thing of the past, and corporate gentrification is a non-entity. A refuge from greed and capitalism, and the salvation of independent music, free thought and good-times. [Read Tankus the Henge’s full vision of Luna Park! below.]

Pitch-black satire shrouded in a neon glow; ‘Luna Park!’ is very much an allegory for what is happening on London’s Denmark Street and all across the UK. A record that gives a voice to independent venues everywhere and amplifies the concerns of those institutions being bled-dry by the greed of landlords and ruthlessness of real estate developers, before it’s too late.

“I don’t think the public knows the entire truth when it comes to the hardships and thin margins of running a venue, and most of the time we don’t want them to. They go out to have a good time and forget about life for a while. Thousands of people work all hours to keep venues, and festivals alive, and at the moment all of it is under threat. The ripples will be felt in every household eventually… We learned and started honing our skill in Denmark Street, in clubs like 12 Bar Club and Alleycat, both of which have closed. Jamboree, Passing Clouds, The Peel, 14 Bacon Street, Madame Jojo’s. All these venues were haunts of ours and are now closed permanently too.  We need to support these small venues so much more.”

Although recorded during the Winter of 2019, the record will no doubt find a new resonance with the thousands working in the live events industry who feel they have been forgotten by the UK government this year too.

Recorded at StudiOwz in Pembrokeshire, West Wales, the album was produced, mixed and engineered by the esteemed Gethin Pearson (Badly Drawn Boy/whenyoung/Crystal Fighters). Additional engineering was contributed by Owain Jenkins, with mastering by Robin Schmidt.

An album of fearless, outrageous rock’n'roll, ‘Luna Park!’ at once brings to mind Blur and the Blockheads, Motown to Madness. From the glam-rock stomp of “god oil money” to the skyscraping gospel psych of “Glitterlung” and its elegiac reprise; the Steely Dan-esque jazz-fusion strut of “(Livin Like A) Pilgrim”, to the warped Northern Soul of “Fayaway” and the boozy barroom blow-out of “Staying On This Side Of The Dirt”; it’s a record that invites you to escape in its incandescent spectacle, but urges you spare a thought for the people who put it on.

“Bands play it safe so much now, and we just don’t care what people think of us” says Jaz. “We wanted to make a record that makes people feel, and think, and rejoice in the chaos and beauty of the underground music scene, which has shaped us and celebrated us, and we wanted to fly its flag a little higher, you know?” 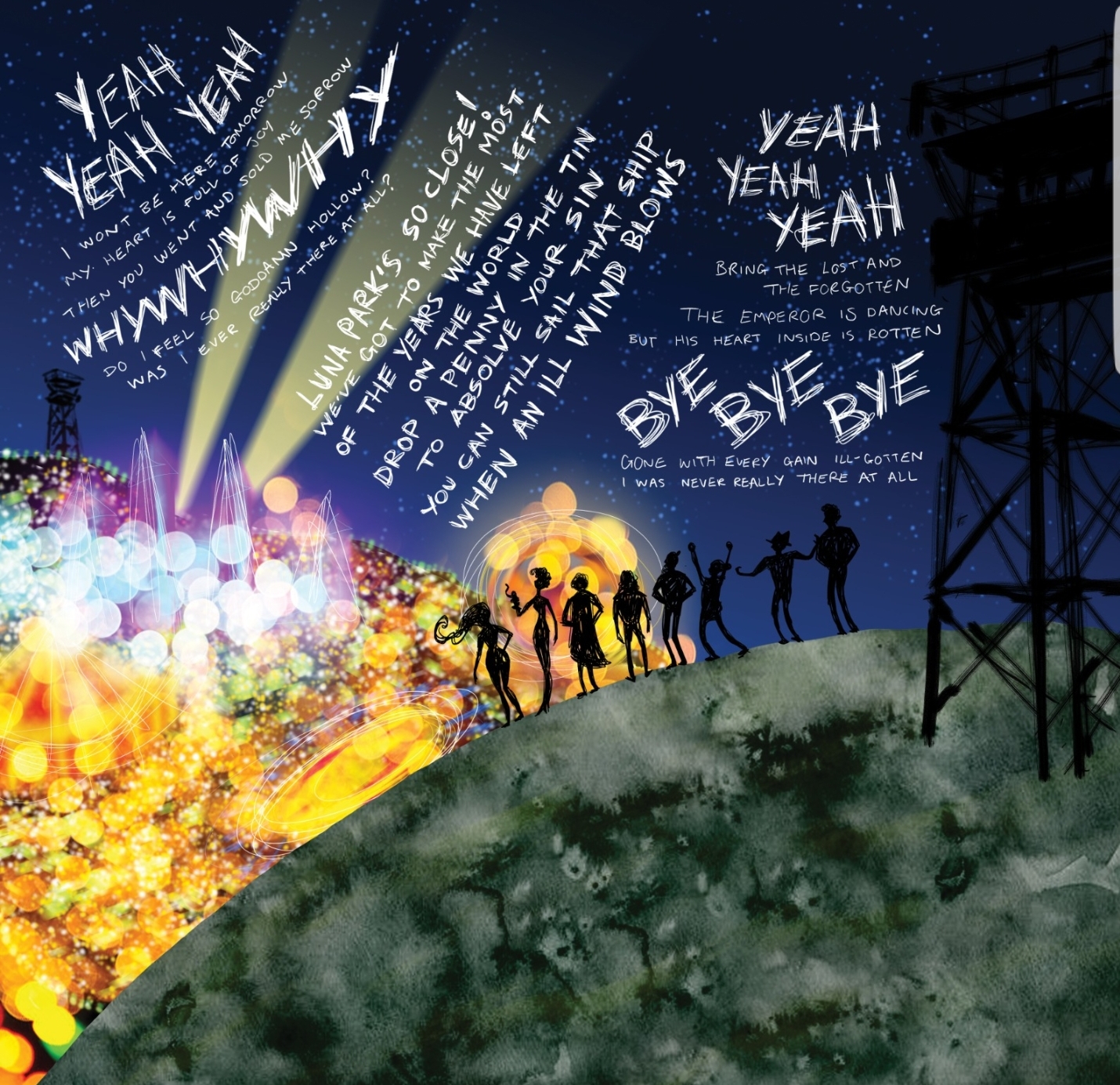 The album features evocative customised artwork made in collaboration with artist Adelle Gough. Gough has visualised ‘Luna Park!’, its characters and even the band members themselves in vivid detail to bring their utopia to life and enhance the listening experience.

Available on all streaming platforms, plus CD and vinyl, a hidden bonus track will also exclusively appear on the physical editions. 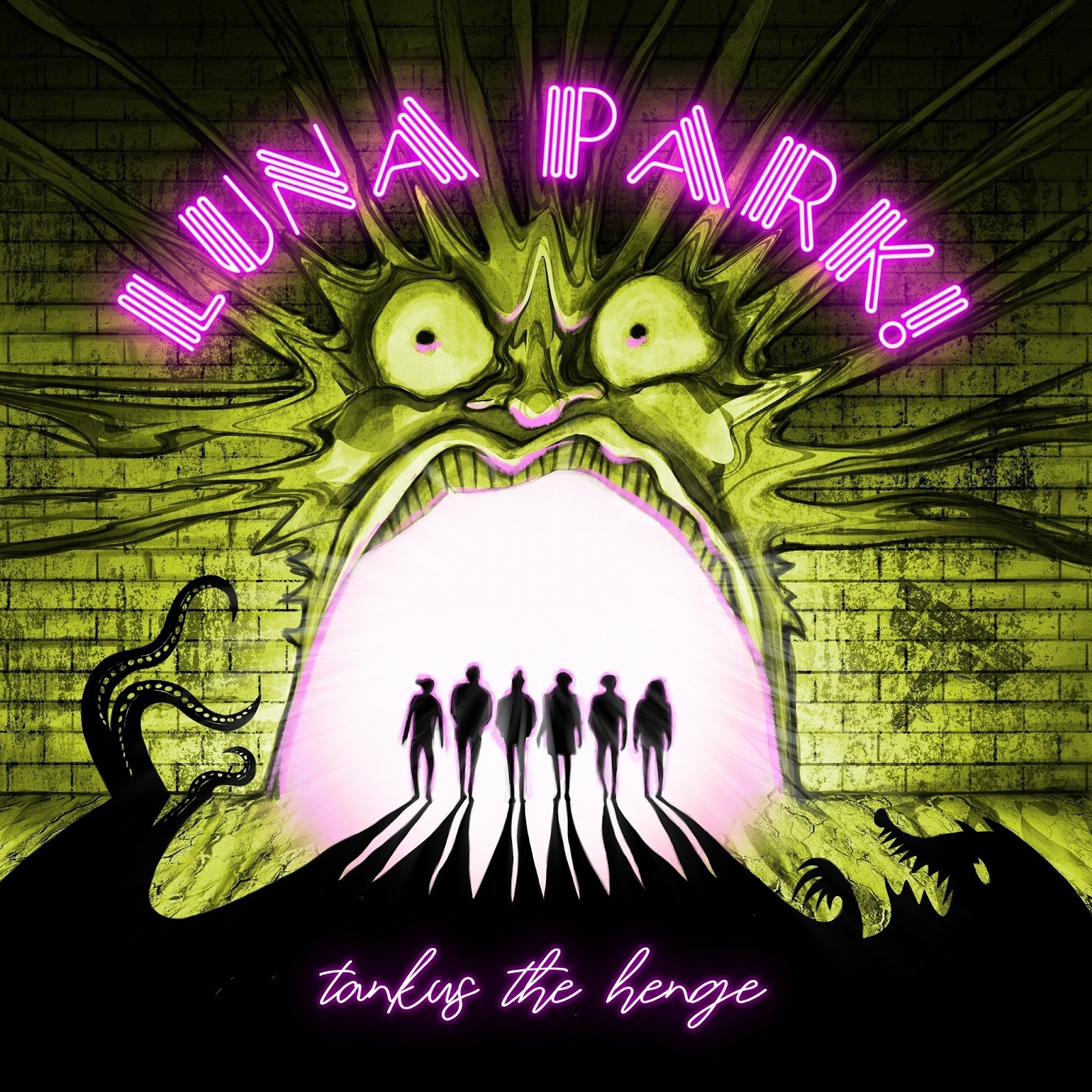 TANKUS THE HENGE ARE:

With guest appearances from:

Unlocking the secrets of ‘Luna Park!’, Tankus the Henge lay out the vision of their new record here:

“Another venue gone. The same message comes through again. Years of history, lost in a pile of paper decisions in an office somewhere. No-one who had the final say had ever stepped inside. Into the darkness and light, stood at the bar and became who they wanted to be, had quasi-religious experiences facing a proscenium arch covered in hot lights with loud, sweat drenched music blasting so loud you forgot the world. Another one gone. Replaced by forgettable glass fronted coffee chains with ubiquitous slogans and recycle your coffee cup here stickers, everything recycled, again and again, on every corner, and no benefit to your soul or their soul or does anyone think about soul at all anymore?

The glorious underworld is being called away. The musicians and the artists, the deviationists, the bar staff and the regulars who lose themselves away from the grey by stepping through a door emblazoned in layers and layers of stickers, punk bands, metal bands, FCK NZS, bands who spent all their money on stickers and went on the road in a broken down bus and remembered those few years for the rest of their lives. How often do you think about that dive bar down some filthy street, with traffic idling past, drivers looking at their phones more than the road, wishing they were somewhere else, while you lost your mind to some band inside, who cared more about you than anyone else at that moment?

What are we going to do when these places are gone?

Let’s rebuild the venues inside the park, relight the fire, and then, when the rest of the world has dulled itself into oblivion and forgotten who they ever were, we will open the gates and spill out into the streets, flooding it with colour, light and sound. Luna Park! is the answer. Full of love, full of hope, and most of all, full of sound.”

Self-described as the world’s only Gonzo Rock’n’Roll band, TANKUS THE HENGE are a genre bending, never-ending, furious and joyous force. Coming together from all corners of the earth, the band are most at home when they’re on the road. Which is most of the time. They have performed on stages across the world, from New Orleans to Albania, and most places in between, and have become regulars at Glastonbury Festival, Montreux Jazz Festival, WOMAD, and countless other festivals. Since their self-titled debut in 2013, the collective have steadily built up a wildly eclectic repertoire that can range from explosive rock riffs one-minute to New Orleans swing, spaced-out funk and beyond the next. Forced from the road while the world recovers, the band have spent their time reading the follow up to their second album ‘I Crave Affection Baby, But Not When I Drive’ (2018). A paean to live music and the venues that have supported them on their journey to date, the band will release their exhilarating new album: ‘Luna Park!’ in Winter 2020.

PRAISE FOR TANKUS THE HENGE

“….a virtual carnival of sound that’s high on energy and deep on soul. With copious helpings of R&B, blues, funk, disco, Django, a dose of Dexy’s, a drop of Ray Davies and a pinch of Madness … – it’s an exciting mélange of sound.” – THE GUARDIAN

“Tankus the Henge have a reputation for whipping crowds into a frenzy, and penning choruses it’s impossible not to sing along to.” – METRO (top 10 acts to see at Glastonbury)

“That’s wonderful, ..I love that. It reminds me of a mixture of early Kinks, Squeeze and a bit of Blur mashed in. His voice is his own, …so great. I love it.” (Smiling Makes The Day Go Quicker)  DAVE DAVIES, The Kinks

“Like The Clash from New Orleans” – NIKOLAJ TORP LARSEN  The Specials