On 3rd December – THE JOSHUA HOTEL – makes his debut on the No Big Deal Music label with the heavenly, heartbreaking: “Somebody New”.

The latest work from the alias of Scottish solo songwriter and producer Joshua Mackenzie is an understated, melancholy pop masterclass.

Written and recorded at his home studio deep in the Highlands of Scotland and loosely inspired by the peerless score of the 2010 film Drive, “Somebody New” is a spacious and contemplative listen that thrives on isolation.

A song of separation told in reverse, “Somebody New” takes the listener deep into the aftermath of a difficult break-up. Sung from the cool shadows that set-in long after the heat of the moment has passed, The Joshua Hotel retraces the moments that brought a relationship to its end. Narrated with that sense of clarity that is gifted only with hindsight, it finds an artist lost in the what-ifs and whys, and wondering whether things could have worked out differently.

As The Joshua Hotel reflects of the track:
“”Somebody New” deals with the end of a complicated relationship. It gives a brutally honest account of looking back at the mistakes and mishandling of emotions that led to heartbreak and fantasising about everything you would change if somehow you could relive it all with the newfound clarity and growth of hindsight.”

Pairing the drifting, reverb-washed productions of Chromatics or The XX, with the immersive bedsit confessionals of 80s forebears like Soft Cell or Chris Isaac, it’s a release as crisp and modern as it is timeless and poetic.

Written and produced  by The Joshua Hotel, “Somebody New” was mixed and mastered by Jason Shaw (Cambodian Space Project).

“Somebody New” follows The Joshua Hotel’s debut EP, ‘Closet Romantic’, which was released earlier this Autumn. Once the vocalist of Inverness indie outfit Lional, the singer set out his solo stall with a diverse collection of tracks that diverged into electronica, psychedelic dream-pop and lo-fi. Turning over a new leaf, its tender songs chronicled the ups-and-downs of navigating life, relationships and battles with mental health with an honest relatability.
The Joshua Hotel kicked off 2021 with the release of debut single ‘The Moments’, which was included in BBC Introducing Scotland’s pop- out playlist and received support from BBC Rapal, Vic Galloway and Jim Gellatly; with lo-fi synth-pop infused follow-up ’I don’t want to go’ also receiving praise from the likes of Tenement TV who hailed it as: “retro and nostalgic, slightly left-field yet heartfelt and refreshing.”
Capping off an active year for the rising Scottish talent, he now joins the roster of Charlie Clark’s No Big Deal Music to release “Somebody New”; a label which aims to showcase the most essential new talent emerging from the Scottish Highlands and Islands. 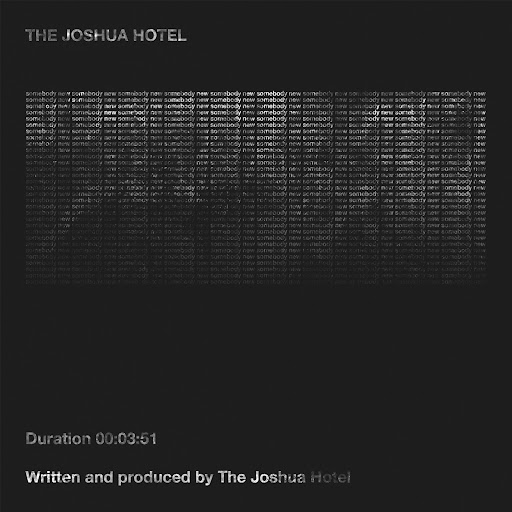 THE JOSHUA HOTEL – “SOMEBODY NEW” – OUT 3 DECEMBER, VIA NO BIG DEAL MUSIC