NOTTINGHAM QUARTET REVEAL NEW SINGLE:
‘I CAN’T BE WITHOUT YOUR LOVE’

+ JOIN ‘THE TRIANGLE TOUR’ THIS OCTOBER

Nottingham quartet – THE MOCKING JAYS – are pleased to reveal a strident new single cut: ‘I Can’t Be Without Your Love’.

The latest in a string of electrifying recent releases from the fast-rising midlands outfit is an anthem unlike any they have made before; a record teeming with louche guitar licks, whipsnade rhythms and an all-conquering indie-disco strut. Out on 13th September, the track marks a grittier, more reflective and altogether unpredictable new direction for The Mocking Jays.

‘I Can’t Be Without Your Love’ was initially penned while filming the video for former single (and fan favourite) ’Kiss My Neck’ in the freezing climes of the Peak District in bitter mid-winter. Finding work for their idle and frost-bitten hands, the devil (and perhaps a little boredom) gave them one of their most irresistible riffs to date as they strived to keep warm between takes. Creating the wildfire spark that day, subsequent sessions back in Nottingham would soon see it burn brightly into the incandescent indie floor-filler we hear today.

With its lyrics rooted in the personal experiences of frontman Jay Smith, ‘I Can’t Be Without Your Love’ takes aim at the digital drug that is social media. Commenting on its addictive drip-feed culture, the track also sees Jay reflecting on the lasting impacts of anxiety and paranoia that it can inflict on those hooked to it.

Opening up about the track, he says:

“‘[I Can’t Be Without Your Love’] came from a sense of insecurity I had at the time of writing it. I constantly felt like I needed affirmation from other people all the time. In person, online.. It made me so angry because I knew the indulgence was so menial when I got it, and you only want more when you do…. The song touches on the fact that despite being true to who you are, everybody has anxieties and sometimes addictions towards certain feelings. The hook of the song ‘Love me, I can’t be without your love’ is referring to receiving gratification from masses of people, mainly through the means of social media likes.”

From its gutsy vocal performance and trampolining basslines, to those sprawling guitars that clash at its thrilling climax, ‘I Can’t Be Without Your Love’ is testament to a band breaking their own mould and expanding their horizons. Experimenting with an array of old synthesisers, incorporating off-kilter time signature changes and discovering  some dense and ‘disgusting (in a good way)’ guitar tones during the playful sessions that led to the songs formation, The Mocking Jays have clearly found their mojo as they land with one of their most emphatic moments to date.

Recorded at their rehearsal space in Nottingham, the track was further produced by Jamie Dodd at The Animal Farm studios.

25/10 – Manchester, Jimmy’s
The Mocking Jays are a four-piece pop-rock outfit from Nottingham. With a deft balance of pop sensibility and rock’n’roll swagger, since their formation in 2014, the band have received support from the likes of 6Music and BBC Introducing, impressed at major festivals such as Y-Not and earned a fervent reputation around their Native East Midlands. Falling somewhere between the out-and-out freneticism of bands like Kasabian and the pop pomp of the 1975, it’s a dichotomy both accessible and irresistible and best summed up in the band’s own accurate words as ‘Sexy, Funky, Dirty, Pop’. 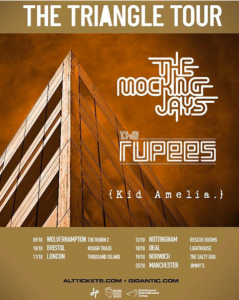