On 1 July, The Mono LPs will release the emotive new single: “You Say”.

Blending moving arrangements with a raw power of feeling that only comes in the wake of loss, the latest single from the Liverpool band is tender, troubled and will touch you to the very core.

With a heartbreaking backstory laid bare by Ste Reid’s vivid and visceral lyricism, the lead vocalist and songwriter explains:

“I wrote ‘You Say’ after the death of my mother. She was diagnosed with Pancreatic Cancer and the whole family moved back into the family home to look after her. This song tells the story of what happened…”

Originally beginning life as a plaintive ballad written on acoustic guitar, it was upon hearing Portishead’s distorted cover of ABBA’s “SOS” that Ste decided to up-end his own creation and embrace its darkness. Working with producer Danny Woodward (Whitewood Recording Studios, Liverpool), the pair de-tuned the sweet sounds of a violin (played by Ste) to create the foreboding drone that quivers like a pulse throughout the track. Adding solemn cello accompaniment and percussion that ticks like time running out, the results make for a single that simmers with a brooding trip-hop intensity and an aching melancholy that opens a window to the soul.

“You Say” is the gravitational closer to the band’s acclaimed second album, ‘Shuffle/Play’ – out now on Fretsore Records. A record that covers a whole spectrum of emotions and sounds, it sees The Mono LPs seeking to emulate all the eclecticism of a music library on shuffle. Stream the album in full / order it here.

To coincide with the release of the new single, The Mono IMLPs will be playing a special hometown headline launch show at the Futureyard on 1st July. Support will come from rising talents Motel Sundown and Paul Nazole. 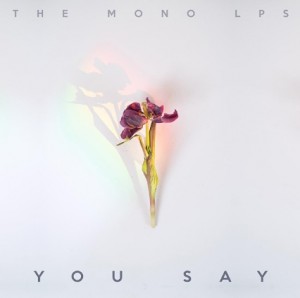 * * * * *
A dynamic Liverpool outfit self-described as “rock’n'roll… with a cello”, The Mono LPs comprise frontman/guitarist Ste Reid, cellist/vocalist Vicky Reid, bassist Chris Barlow, and drummer Tom McCabe. With a broad range of influences from Stevie Wonder and The Beatles, classical music and Red Hot Chilli Peppers, the band will be harnessing them all (and more) in a forthcoming collection of tracks that promises to showcase their versatility in electrifying “jukebox style”.

Created by accident, The Mono LPs started when Ste Reid chanced upon Vicky (then-Mutch), a relation of Elvis Costello, in a coffee shop. Intrigued by the huge case Vicky was holding, Ste asked her what string instrument she was playing – the rest is history. With the unusual addition of a cello into the mix, The Mono LPs’ distinct baroque-fuelled, bluesy rock ‘n’ roll sound has earned them a dedicated fanbase (the ‘Monettes’), media praise from the likes of NME and BBC Introducing and fans in the music community including Mick Jones, Alan McGee, Blood Red Shoes and The View. Impressing at major festivals such as Kendal Calling and Sound City, the band’s local shows at the famous Cavern Club and Zanzibar in their hometown have proven wall-to-wall sell-outs.

Releasing their debut: ‘States of Decay’ to acclaim in 2016, The Mono LPs released its long-awaited follow-up, ‘Shuffle/Play’ in 2021.

FURTHER PRAISE FOR THE MONO LPS

“big guitars, rising riffs and crashing drums are the order of the day”
LOUDER THAN WAR

“an enigmatic collection worth listening out for”
THE MORNING STAR

“the perfect way for The Mono LPs to return and hopefully rock our worlds for the foreseeable future.”
WHEN THE HORN BLOWS