UK TOUR FOR NOVEMBER - WITH SUPPORT FROM JULIE BYRNE

NEW ALBUM ‘I LOVE YOU. IT’S A FEVER DREAM’ OUT NOW

“a thing of refined and impeccable beauty” – NPR

“The arrangements have the dusty intimacy of bedroom recordings, even when horns or strings are

layered over delicately picked guitar.” – Uncut “Kristian Matsson is back to his effervescent best.” – DIY

Ahead of his UK tour this November, The Tallest Man on Earth has shared two stunning solo sessions for Mahogany and NPR, performing songs from new album, I Love You. It’s A Fever Dream. (out now on AWAL). Order and play the record HERE.

Illuminated by light pouring through a deserted attic in Hampstead, Mahogany’s intimate performance sees Kristian exposed and raw, with the subtle warmth of “What I’ve Been Kicking Around”‘s melodies shining through. Two more performance videos will be shared in the coming months.

Since 2010, Mahogany Sessions have been bringing millions of people around the world closer to the artists they love. Incredibly intimate musical moments from the likes of James Bay, Bastille, Hozier, Birdy, Leon Bridges, Jacob Banks, JP Cooper, Rag’n’Bone Man, Gavin James. Watch it below, along with NPR’s Tiny Desk Concert from earlier this month:

The Tallest Man on Earth will return to the UK for a full tour this November, with Julie Byrne as support. Dates are as follows: 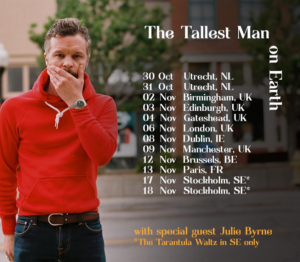 Born in Dalarna, Sweden, Mattson released the critically acclaimed Shallow Grave in 2008. He went on to release three more full length albums, The Wild Hunt (2010), There’s No Leaving Now (2012) and The Dark Bird is Home (2015), which Pitchfork calls “surreal and dreamlike,” while Consequence of Sound calls the record “honest storytelling that grows from bare guitar into a lush, flowery, full-band adieu.” He also released an EP, When the Bird Sees Solid Ground, in 2018.

In recent years Matsson has undertaken single oriented projects that incorporate writing, producing and self releasing songs and videos in regular intervals, often with purposefully intense deadlines. He’s described finding inspiration in entire process, and in particular in the satisfaction of making something and having it out quickly. For listeners and viewers the fascination has been in watching an artist work through his life, in problems and celebrations large and small, putting his thoughts out into the world while he’s still processing them himself and in watching them evolve over time.

Matsson notes of I Love You. It’s A Fever Dream., “Making the album, I was thinking a lot about the lenses we view our lives through. For some reason, our worst tendencies seem to be carried out so loudly, while our best go unnoticed. I’ve come to realize that some of the most powerful, most inspiring moments in my life have been the most subtle and that so often the thing that deserves my attention, is the least trying to get it.”