“A THING OF BEAUTY” – THE NEW ALBUM

In 1980, Kirk Brandon formed Theatre Of Hate from the ashes of heralded punk band The Pack. Joining Kirk on vocals were notable punk musicians Stan Stammers and Luke Rendall, along with old school friend, Steve Guthrie and Canadian born John “Boy” Lennard, who revolutionised the band’s sound with his haunting sax lines.

Theatre Of Hate’s debut double-A-side single, “Legion”/”Original Sin”, topped the independent chart in 1980, and “Westworld”, their debut album, produced by Mick Jones from The Clash and released in 1982, held the number one position for 21 weeks. The single taken from the album, “Do You Believe In The West- world?” has become an anthem and is still widely played in clubs and on international radio, as well as fea- turing on numerous compilation albums.

Theatre Of Hate imploded in 1982, with Kirk taking Stan forward to form Spear Of Destiny, but the band has resurfaced over the years to play some very special shows.

Having been asked by John Curd to join The Damned for a massive show at London’s infamous Round- house in December 2014 the band once again joined the fray. A short set of dates around the London Roundhouse anchor show attracted rave reviews.

2015 saw the band play two short jaunts across the UK in April and December both sets of dates wowed large crowds.Whilst touring the band recorded and released, Kinshi funded by a fans pledge campaign – the first new studio album in 30+ years. The 12 track album launched in November 2016 sublimely linked the past and present to great press and fan acclaim leading to further extensive live shows across the UK, Europe and the USA.

With a now settled line up of Kirk Brandon, Stan Stammers, Adrian Portas, Chris Bell & Clive Os- borne (currently deputising for John Lennard) the band released two EP’s I.Sensou (War) & II.Heiwa (Peace) in 2019 which have maintained the ongoing success and paved the way for the bands latest and, appropriately named, studio album, A Thing Of Beauty, again funded by the growing fanbase via very specially packaged releases on CD & Vinyl. Recorded during the 2020 lockdowns and to be officially released in April 2021 the albums’s 23 tracks will be released on Vinyl, CD and Digital formats. With the trade- mark Theatre Of Hate sound this new venture has already become a favourite amongst the loyal fanbase.

“The setlist is packed with classic Theatre of Hate tracks, from ‘The Wake’, through to ‘Legion’ and ‘Original Sin’, as well as ‘Incinerator’ and ‘My

Own Invention’. ‘Judgment Hymn’ soars, ‘Propaganda’ roars; ‘63’ is flawless, ‘Rebel Without A Brain’ kicks you in the chest. The quality of songs and their performance is relentless.” Alan Neilson – gettothefront.co.uk

“We have seen the Stranglers, SLF, The Damned and Killing Joke go from strength to strength in the past few years and with performances this powerful and this spell binding it won’t be long before Theatre Of hate join them” John Robb – Louder Than War

“ What a fantastic band, playing music that comes from outer space and refuses to be bracketed. Every note conjured by the melding of dark and light energy into a fury of anger, love and power” Juniper Gavin – Vive Le Rock! 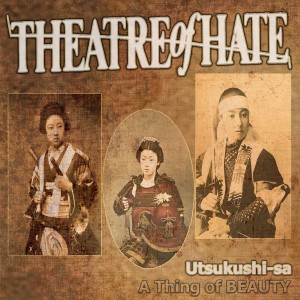 EARLY REVIEWS FOR “A Thing of Beauty”:

“Oozes every ounce of Theatre of Hate, mesmerising sax, haunting bass, rhythmic skins, slight but perfect guitar, and vocals that make the hair at the back of your neck stand up on end…’’

“I‘m loving all the tracks for different reasons. It’s a blinding album and a great way to end this year on a high note! Long live The Hate!”

“Did not expect that - absolutely brilliant from the first note to the last…sounds 2020 fresh but stamped with 1982 at its core…the range and depth of this masterpiece should not be missed. stick it on, settle back and prepare to be in awe of master craftsmen at work”

For interviews, press copies and any further information please contact: