Dublin six-piece THUMPER have announced a string of UK live dates for this year.

Fresh off the back of the release of their critically acclaimed debut album ‘Delusions of Grandeur’, THUMPER will be bringing their maximalist sound to venues across the country.

Including stops in London, Brighton and Manchester, the cult Irish heroes are no strangers to international touring with three extensive UK tours, a European tour and numerous festival slots already under their belts.

With BBC Radio 1’s Abbie McCarthy praising the band’s “massive, massive sound” and Radio 6 Music’s Chris Hawkins lauding them as “punching like heavyweights alongside Fontaines D.C. and The Murder Capital”, the band’s debut record also attracted attention from tastemaker names including Clash Magazine, The Line of Best Fit and Golden Plec amongst others.

The tour announcement also comes as THUMPER gear up to release “25”, the final single from ‘Delusions of Grandeur’ arriving 29 July 2022.

Of the fan-favourite album track, frontman Oisin explains: “”25” is one of the first songs that we ever collaborated on as a unit, and the first time I felt like we had stumbled across a formula that was unique to us. It’s a fairly fretful and existential number, written when I was 24 about turning 25, recorded when I was 27 and released when I was 29 … and the cosmic ballet rumbles on.” Pre-save the single version of “25” here.

Full dates and details of THUMPER’s UK live dates are below, and tickets are available now. 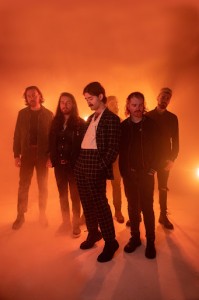