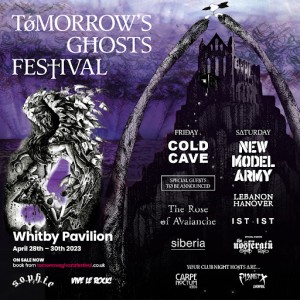 Back in black and before you know it…

TOMORROW’S GHOSTS FESTIVAL is delighted to announce its Spring Gathering in Whitby for next year.

Following an exceptional demand for tickets for the upcoming Halloween event in 2022, Whitby’s premier Goth music led festival is delighted to confirm the return of its ‘Spring Gathering’. Taking over the Whitby Pavilion - Friday 28th & Saturday 29th April 2023 - it will be the first such seasonal offering for over 4 years.

A true celebration of all things Gothic, Tomorrow’s Ghosts invites you back to the home of Dracula for a darkly exhilarating weekend of alternative music and culture. With an international line-up that caters to a broad range of sub-genres and tastes, today the festival is very pleased to announce its 2023 programme - and there’s plenty to get your teeth into…

In its first announcement, Tomorrow’s Ghost’s is over the moon to lock-in an exclusive Friday headline appearance from the cult darkwave visionaries Cold Cave, who fifteen years into their career have established themselves as long-running luminaries of the underground and worthy headliners for any connoisseur of sonic carnage. Sublime supporting sets across the evening will also come from Leeds’ legendary goth-rock originals The Rose of Avalanche and UK-Irish post/punk acolytes Siberia. Fans should keep their eyes peeled for the announcement of some Very Special Guests to be confirmed in the coming weeks too…

Following up on the Saturday night, Yorkshire-formed titans New Model Army will be continuing the celebrations for their 40th Anniversary in seismic style. Earlier in the night, expect a *very special guest* slot from Lebanon Hanover, with the shadowy British-German duo bringing their evocative darkwave sounds out to play for this very rare UK appearance. Adding to what is an excellent bill the Saturday night is stacked with sizable supporting slots from Mancunian industrialists in ascendance IST IST, plus a theatrical set from revived gothic rock devotees The Nosferatu, who will perform as *Special Guests* and open the Saturday night event. 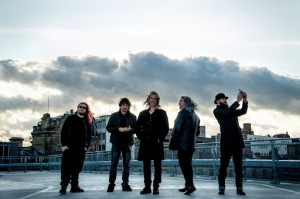 As in previous years, Tomorrow’s Ghosts will also be offering choice club nights into the early hours. No strangers to the Whitby crowds, Leeds living legends Carpe Noctum and the supernaturally talented scousers Planet X will be resurrecting goth classics for the afterdark masses on Friday & Saturday respectively.

LINE UP SO FAR

15 years on from Sophie’s tragic passing in a vile hate-related crime, Tomorrow’s Ghosts will be supporting the exceptional work of the Sophie Lancaster Foundation throughout the weekend.

Established in 2018, Tomorrow’s Ghosts Festival has become an annual Halloween fixture at The Pavilion in Whitby (UK). A celebration of all things Gothic that also embraces a wide range of alternative culture, the festival aims to host both established and up and coming bands to reflect the diversity of the goth and alternative music scene as well as similar highlights from the mediums of film, art, guest appearances and theatre.
Previous editions have hosted acts including Wayne Hussey & The Divine, Peter Hook & The Light, New Model Army, Paradise Lost, Fields of the Nephilim, Pop Will Eat Itself, The Chameleons, Pink Turns Blue, Salvation, Evi Vine, The Membranes, The Eden House, Sometime The Wolf, The Society, Terminal Gods, Sweet Ermengarde Saigon Blue Rain, Christine Plays Viola, Mercury’s Antennae and Clan of Xymox.

This Autumn, the 2022 Halloween edition of Tomorrow’s Ghosts will see goth trailblazers Fields of the Nephilim and garage-rock supergroup The Loveless (comprising Marc Almond (Soft Cell), Neal X (guitarist of Sigue Sigue Sputnik), plus Mat Hector and Ben Ellis (Iggy Pop’s rhythm section) and James Beaumont) headline each night of the festival. Support across the weekend comes from fellow gothic luminaries including very special guests Into A Circle, Ghost Dance, and Balaam And The Angel, plus exclusive performances from Bootblacks, All My Thorns and Evil Blizzard present… ‘Blizzoween’. Final tickets are on sale now.

Dabbling in the dark arts to provide one of the most unique festival experiences in the country, expect diverse performances and surreal happenings aplenty when Tomorrow’s Ghosts returns for its first ‘Spring Gathering’ in 4 years in 2023.

Tickets for Tomorrow’s Ghosts Festival are available for pre-sale today.

Tickets will then be available for general sale this Friday 27th May at 10:00am.

Links and prices are as follows: 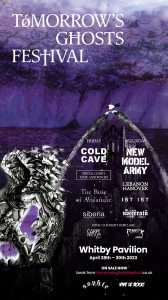