“The band’s brooding sound matches outright directness to a sense of weighty melancholy, recalling everyone from The Sound to Editors in the process.”  – CLASH MAGAZINE

“could prove key in cementing the city’s reputation as one of Europe’s most compulsive music capitals.” – THE LINE OF BEST FIT

“The sprawling atmosphere conjured up in singles Kitchen Sinking and Time Eats Up evoke the early genius of post-punk revivalists Interpol.” - THE DAILY STAR

“TV People execute punk’s confrontational nature with aplomb, and in an incredible manner to boot.” – EARMILK

“Just adding to the pedigree of great bands coming from Ireland at the moment.” – FRANKIE FRANCIS, AMAZING RADIO

Hot on the heels of the BBC Radio 1 and BBC 6 Music tipped ‘Nothing More’, rising Dublin indie-punks TV PEOPLE reflect on addictions and self destructive behaviours in brooding new cut ‘String’.

Joining forces with Dan Doherty at Darklands Audio (Fontaines D.C., Vulpynes) and Christian Wright at Abbey Road Studios (Radiohead, Blur, LCD Soundsystem) the Dublin outfit are taking on 2020 with force; building a name for themselves as the latest in a wave of talent bursting out of Dublin.

On ‘String’, the four-piece’s attention to detail shines bright; maintaining the brooding, punk-tinged undertones and slowed guitar lines which have earnt early comparisons to the likes of Interpol and Editors.

Speaking about ‘String’,  frontman Paul Donohoe details: “’String’ is about my past experiences with addiction and using self destructive behaviour as a coping mechanism for life’s problems.

In the culture we have surrounding drinking and sessioning, the line between having a good time and seriously damaging your mental health isn’t always clear. Self-destructive behaviour is normalised and even encouraged. I’ve seen a lot of people around me going through it. It’s hard to escape from even when you’re aware that it’s a problem because it’s so hidden and ingrained in the way that we socialise.

The song is about the feelings of hopelessness, regret and frustration that I’ve felt in the past when I’ve been stuck in that situation and the damage that they do to your mind over time.”

‘String’ follows the release of singles ‘Nothing More’, ‘Kitchen Sinking’ and ‘Time Eats Up’ earlier in 2020, with ‘Nothing More’ collecting praise from Huw Stephens on BBC Radio 1, Steve Lamacq on BBC 6 Music and The Line of Best Fit to name but a few, ‘Kitchen Sinking’ earning a spot on Spotify’s ‘An Alternative Éire’ playlist, and ‘Time Eats Up’ receiving heavy promotion from the legendary Abbey Road Studios.

Hailing from the heart of Ireland’s capital, TV People are a Dublin four-piece who lace their indie/garage rock sound with punk-infused undertones. Despite forming in early 2019, the band have been honing their craft across the live scene, making themselves one of the most exciting bands coming out of Dublin right now. 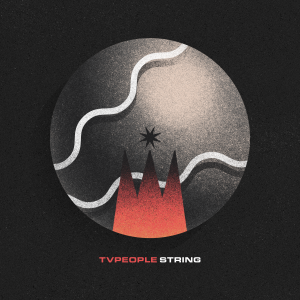