It’s immediately apparent straight away that if SPILT are angry young youth, then Paul Mason is an absolutely fucking livid middle-aged man.

“When I heard Suicide Feast, I absolutely had to play it, its musical intent you just can’t fake”
Tom Robinson, BBC Radio 6

Vile Assembly are back, and they’re really not happy. Introducing, a ferocious new single from the anti-establishment punk outfit: ‘Propaganda’.

‘Propaganda’ is Vile Assembly at their most vitriolic, attacking a political system that protects the elite whilst providing an illusion of democratic choice. A system that relies upon a comatose population enthralled by the latest iPhone and mesmerised by the latest episode of Love Island.

Smacking you in the face like the bastard child of PiL, the Bunnymen and Manic Street Preachers, and with lyrics scorched with the enraged political sensibilities of the latter to boot, ‘Propaganda’ is gloriously hard-hitting in every sense. Releasing ‘Propaganda’ on Friday September 6th, the latest from the Liverpool band is like manna from heaven, alternative facts and “truth isn’t truth”, it challenges the assumption that we are free and self-determining.

Vile Assembly allege ‘Propaganda’ is not some other place, another time, a past event, but argue existing western societies and their financial institutions are involved in a sophisticated and diverse game of control focused on behavioural control by the use of tabloids, television & social media. Whilst establishment owned media corporations are employed to use fear as political currency, creating a confused society at war with itself and its own emotions, you are not a thinking people, you are merely powerless units to be manipulated, managed and controlled.

“The rich white corporate elite who run the media are deceiving people into believing that immigration, benefit fraud and the poorest in society are responsible for the country’s problems, and that right-wing politicians, once re-elected, will fix the countries crisis. All we read is Propaganda; all we hear is Propaganda, White Man’s Propaganda”

Reiterates Paul’s sentiments and the song’s themes, the video for ‘Propaganda’ draws upon Ray Nelson story “Eight O’clock in the Morning” that inspired John Carpenter’s seminal 80s cult movie “They Live”, whilst also referencing Talking Heads, The Damned & Peter Gabriel. It is raw and infectious, it is Punk and rebellious, a visual soundscape for the disaffected in an age where age has suddenly become irrelevant.

“I can see that the country is heading for political and financial disaster. To keep the wealth of this rich nation in the hands of the white corporate elite, we are encouraged to focus on disasters in other countries, so things feel safer in the UK. By telling people, the threat to their safety and way of life is a foreign terrorist, it allows our political leaders and the establishment to keep on with their quest of stripping the country of its publicly owned assets and resources, selling them on to ironically, foreign investment companies.”

Though the Vile Assembly’s roots can be traced back over two decades ago, the band have been somewhat dormant until now; patiently waiting for a time their Punk ethos and thinking would find its true assertive voice. Sick to the teeth of the world they observe in 2019, the the time for the Vile Assembly is surely now. Erupting forth with a torrent of bile soused rock’n’roll, Paul Mason (the band’s lyricist and vocalist) joined by Mark Wainwright and Mark Webb are here just in time to put the world to rights.

Inspired by Punks founding fathers and working with a DIY ethic out of their own studio as built by Mark Wainwright in a derelict stone outbuilding, the Vile Assembly have begun their campaign of recording, producing and self-releasing music that takes a stand and tells it like it is. In the tradition of small record labels, they created Vile Entertainment and have proceeded to release a series of vitriolic single cuts, that take aim at issues that most wannabe pop idols would fear to tread. Utilising the free tools available in today’s digital world and channelling through them the cut-throat sonics and no-prisoner lyrics of punk masters the likes of Desperate Bicycles, Buzzcocks, Sex Pistols, and beyond; Vile Assembly have already built the foundations of their musical revolution, unleashing a string of controversial songs, uncompromising hard-hitting videos and then force that is Paul Mason himself, a voice that is unafraid to condemn the feral elite. Adding colour to their statement of intent with typically erudite form, the band’s Paul Mason says:

“People are more interested in a rich family’s child playing a piano concerto version of Smells Like Teen Spirit, or a baby duck slipping into a pond from a wet path, that’s entertainment for a lot of people, meanwhile the world’s resources are being sold for death”

New single ‘Propaganda’ follows the head-turning first single ‘Last Century Man’, which pricked ears, rallied supporters and enraged critics across the globe earlier this year. Standby for further releases in due course, the Vile Assembly’s business is only just beginning.

Following a series of fierce live shows in the Spring, the Vile Assembly will hit the road once more for a series of UK dates later this year. Catch them at the following shows: 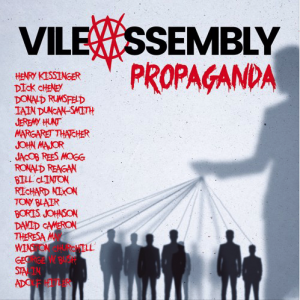 FURTHER PRAISE FOR THE VILE ASSEMBLY

A Vile Assembly gig is a punch in the stomach. And it’s hit us pretty hard tonight. We were not quite expecting that.

It’s immediately apparent straight away that if SPILT are angry young youth, then Paul Mason is an absolutely fucking livid middle-aged man.

“When I heard Suicide Feast, I absolutely had to play it, its musical intent you just can’t fake”
Tom Robinson, BBC Radio 6

“Vile Assembly provide an important injection of social commentary into a world glazed over looking at their devices. Sonically they deliver a healthy dose of anarchic punk for those who like me can remember the glory days of Punk”
Lori Gava, XS Noize

“Vile Assembly’s music is more than just a form of entertainment, but a radical and necessary call to arms for activism”
Harriet Kaplan, The Art of LA

“Fresh from some support slots with The Damned – this Liverpool based post-punk unit are picking up tons of positive press and it’s easy to hear why: the songs are solid, well written and importantly for me – thought provoking”
Rockbrat, Australia Rock Review